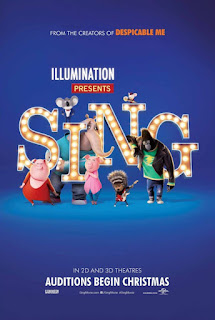 The show must go on.  Clever animation and a wealth of songs tell the story of Showman Buster Moon (McConaughey), a koala who has inherited a famous theater from his father, and he is desperately trying to keep it going.  But he has had a number of failed projects and is about to lose it to the bank when he has a great idea for a singing contest.
The screwball comedy in the efforts to make it happen include such things as Buster’s secretary Miss Crawley (Jennings) constantly losing her glass eye, which bounces around, landing on the computer keyboard, and making $1,000 into $100,000.  Buster doesn’t find out about this until much later, because as Miss Crawley was carrying a stack of the flyers announcing the contest to show Buster, the whole stack gets blown out the window and scattered by the wind.  Hundreds of flyers all get picked up by aspiring vocalists all around the city in need of cash.
Sing is animated and all the characters are animals.  There are pigs, elephants, sheep, baboons, giraffes, and an alligator among others, but these are only the main players.  Rosita (Witherspoon) is a housewife pig with 25 kids and an absent-minded husband who takes her for granted.  She is tech-savvy, and creates an automated assembly line at home so she can get out of the house to compete.  Mike (MacFarlane) is a mouse with a Frank Sinatra voice who has a gambling problem, and hence has big brown bears chasing after him for cheating.  Ash (Johansson), a porcupine is part of a duo, but Buster only wants her to sing, wounding her narcissistic partner deeply.  When she gets really into her songs, quills have a tendency to fly out and get stuck in the audience.  Meena (Kelly) is an elephant with a voice, but she is so shy she clams up during a performance, which enrages her “stage-mother” father.  Included is Johnny (Egerton), a gorilla who has great talent for jazz piano, the only problem being that his gangster father wants him to continue to pull off jobs with him.
When one disaster follows another, and it looks like all is lost, Buster engages the help of his friend Eddie (Reilly) the sheep, who comes from a wealthy family and has a nanna, Nana Noodleman (Hudson and Saunders) who used to perform in operas at Moon’s concert hall.  Buster wants her to sponsor the contest, so invites her to a rehearsal.  Disasters happen, involving all the contestants and those chasing after them, so that it’s doubtful Buster and his hall will survive.
The primary theme of the film is that everyone involved must pull together to make the show go on, and that fundraising is always something to be dealt with.  Sometimes it also takes boosting the self-confidence of the performer, holding back parents pushing their children inappropriately, and then convincing other parents that their child has talent and needs to be encouraged.
The film is a bit of a mish-mash in the beginning, and I wonder how many children can appreciate the plot, because it has a lot to do with the “business” of running a theater.  But when the contest and parent involvement begin to happen, the story gets more interesting and engaging.  Writer-director Garth Jennings has conceived of a picture that is ultimately engaging and has good information for children.  The production design by Eric Guillon and animation pull the audience in visually, and Toby Talbot’s music is a running delight throughout.

This is a fanciful animation about what is actually involved in show business.