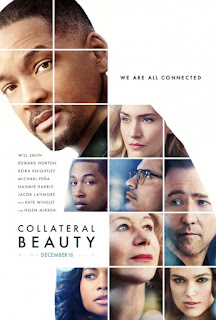 Whimsical movies with heart and soul make for fine holiday fare, and Collateral Beauty fits the bill, if the viewer doesn’t mind some attention given to death.  Collateral Beauty is more than whimsical; it illustrates how devastating the loss of a child can be for a parent.  Director David Frankel’s film, like Hope Springs, Marley and Me, and The Devil Wears Prada before it, makes insightful observations about the human condition in some of its variants (including issues of the three other main characters), mixed with good doses of plain humor, black humor, and pure fancy.  I found this movie hilarious at times, extremely moving to the point of tears at other times, and simply delightful, ultimately.
The problem at hand is that the head honcho of a business is going through an extended bereavement reaction (he stops coming to work at all), threatening the livelihood of his partner and business associates and employees.  Howard (Smith) has lost his daughter, so Whit (Norton) his partner, and colleagues Claire (Winslet) and Simon (Peña) try everything they can think of to help him function again, but nothing seems to work.  In desperation, Whit has a brilliant idea involving a private detective (Dowd) and three actors.  The actors will represent love, time, and death, the abstractions Howard has literally been writing letters to and dropping in the mailbox.
Something like angels—but not quite—death (Mirren), love (Knightley), and time (Latimore) visit Howard at unexpected times, producing the letters he has written to them in which he claims that all have betrayed him.  The actors function something like therapists, addressing his comments like (to death) “You’re dead tissue that won’t decompose.”  And Howard reacts belligerently to all of them.  But he also lurks outside a bereavement group room, peering in the window and then walking away.
It’s clear that writer Allan Loeb and director David Frankel want us to think about life, time, and death in a different way; they can be serious and weighty, but just as well fanciful, truthful, and truly funny.  These are non-respecters of person; as the film points out, Whit, Claire, and Simon all have challenges, just like Howard does.            A strong cast, along with the script and direction, make this movie sing, boosted by the music of Theodore Shapiro.  A bonus is the trope of progressively falling dominoes signifying the vast reach of human connectedness.
Collateral Beauty reminds me of Lars and the Real Girl in their sometimes serious, sometimes humorous depiction of human neuroses and the protagonists’ overcoming them with the support, understanding, and patience of family and friends.  The former is a little more absurd and artificial, especially the twist at the very end.

Not your typical Christmas tale, but warmly human and amusing.