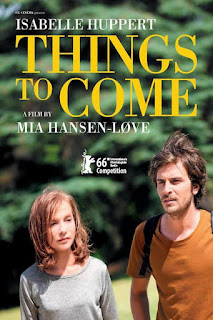 This is a French film for thinkers—people who like to ponder questions about life, love, and wellbeing.  Nathalie (Huppert) is a philosophy teacher with a passion for her subject, which radiates out to her students, who revere her and even come close to loving her.  She speaks to their inner selves at a time when demonstrations and petitions are swirling around the campus.  One student in particular, Fabien (Kolinka) stops by her classroom after he has graduated to thank her for her guidance.
We get glimpses of how Nathalie conducts her classes, in her posing questions such as, “Is truth debatable, as contrasted with belief?”  Or she gives them a Rousseau quote to think about and be prepared to discuss:  “If there were a nation of gods, it would govern itself democratically.  A government so perfect is not suited to men.”  This academic material in the film is always presented with different points of view, and refrains from claiming one side or the other is right.
Home is a different story, where Nathalie’s two teenage children tease her a bit about her intellectual connections, and her husband—who is also an intellectual, but much more dispassionate—is slightly scornful of her.  Their interactions are far from loving, and clearly bother the children.  It’s interesting that Chloe (LePicard) lets her father know that she and her brother are aware of his affair, and want him to tell their mother right away, which he does.  But what’s more interesting is that when he does tell her, she is stunned (they’ve been together for 25 years), and immediately asks why he didn’t keep it a secret from her.  After he lets her know he is moving out and she has time to process the information, then the anger appears.
However, this is not the usual tale of a man leaving his wife of many years.  Even though it is at a time when her children are leaving home, her dependent mother is dying, and her publisher is attempting to commercialize her work, Nathalie is resolute, and soon realizes that she is free—truly free—for the first time in her life.  What she makes of it is the main point of the film, along with a parallel theme of political issues the masterful writer/director Mia Hansen-Løve throws out for us to ponder.  She does it through Nathalie’s classes and through her relationships and conversations with the former student Fabien and his fellow provocateurs.  In these thought-provoking discussions, generational differences in perspective are apparent.  Upon being confronted by Fabien about her lifestyle not being guided by a “thought system”, Nathalie says, “I’m too old to be radical; I’ve done that, been there before.  I’ve changed.” Fabian’s girlfriend softly retorts, “But the world is the same, only worse.”  At another time, Nathalie explains more fully: “Revolution is not my goal.  Mine is more humble; it’s to help kids think for themselves.”
Isabelle Huppert is her usual mix of coolness and mysteriousness in playing her character.  She has no trouble keeping us engaged with her as the main focus for almost the entire film.  She is backed up here by the fine, thoughtful script and astute direction of Mia Hansen-Løve.  The writer/director is the daughter of two philosophy teachers who talked about their work at home, so the insertion of deep philosophical questions into the dialog comes across naturally and authentically.  Music by Raphael Hamburger is delightful or sad, depending on the context, and Cinematography by Denis Lenoir is first-rate.

A quietly brilliant film about an older woman adapting to major changes in her life with humor and soft resolution.

Posted by donnarcopeland at 4:45 PM