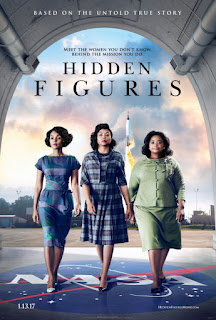 Heartbreaking, thrilling, suspenseful, funny—Hidden Figures embodies all these, including inspirational.  I’m sorry it has taken so long for the story about three heroic black mathematicians at NASA to be told to the mainstream.  But at least it’s out now for all to see at their local theaters.  The film is based on the book, Hidden Figures, by Margot Lee Shetterly, who also served as one of the producers.  Shetterly won an Alfred P. Sloane Fellowship based on this work, and apparently, Levantine Films bought the film rights soon after she completed it (or maybe before, since her book is dated 2016).
The film opens with little Katherine Harrison (Henson) demonstrating her mathematical genius to school officials when she was in the sixth grade.  Her teacher was determined that she would have educational opportunities that were appropriate for her.  Soon, we meet her as a grown-up on the road to work at NASA with her two friends, Dorothy (Spencer) and Mary (Monae).  They’re having car trouble, but since Dorothy is a mechanical as well as math genius, she fixes it.  After showing their work IDs to a stunned policeman who had stopped to investigate, he offers to escort them to work with red lights blinking so their delay won’t make them late.
Most of us simply have no idea about the countless indignities these women will have to face, from having to go to the restroom labeled “Colored Women” a half-mile away, to having pertinent information for their jobs hidden from them, to a separate coffee maker (so white people won’t have to touch it)…we could go on and on.  Throughout, the women are polite, patient, and kind (until pushed too far, then they react strongly, effectively, and appropriately).  The rationalization they are given for such treatment?  “That’s just the way it is.”
Hidden Figures, to its credit, gets into the fears about the Soviets and the space race at the time, which shows up at NASA certainly, but also by the patrolman on the country road and by the children at school who have drills to get under their desks in case the Soviets attack the U.S.  President Kennedy is featured prominently in showing the pressure to be first in the space race, which dials up the pressure on NASA.  All this reinforces the importance of three black women in their previously unheard of roles.
Henson, Spencer, and Monae are all standouts, but Henson shows special flair when she answers in an outburst why she disappears for 40 minutes at a time (the walk to the restroom) and why it’s crucial for her to receive updated information immediately.  She also shines when she’s perched on a ladder writing complicated formulas for problems that have perplexed a whole room full of mathematicians.  In the evening, she slides into being a loving, demonstrative mother to her three girls.  I loved Henson’s portrayal of her policewoman character in CBS TV’s “Person of Interest”, where she showed intelligence, canniness, and wit, just like she does here; but here, she’s in an elevated position finally being recognized for her worth.  Ah…..!

A story that should have been told long ago.

Posted by donnarcopeland at 9:50 PM