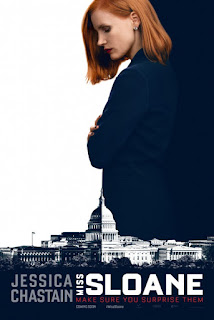 If you like exciting courtroom dramas that have key relevance for our time, you will love Miss Sloane and another captivating performance by Jessica Chastain.  Miss Sloane is a Washington lobbyist with the reputation of being the best in the city.  She is more than intellectually sharp and in speaking her mind, lets the facts roll off her tongue like automatic gunfire.  [Pun intended, as she is lobbying for a gun control law.]  She is unpredictable and usually many steps ahead of anyone else involved in an issue.  “Never be taken by surprise”, she says, and “play your trump card after they play theirs.”  (A demonstration of which she uses brilliantly in the final moments of the film.)  She teaches her six or so protégées maxims, tossing them out in rapid fire while working together on a project.
To the screenwriter Jonathan Parera’s credit, we get a bird’s eye view of the lobbying industry in Washington, D.C. and its corruptive influence on Congress members.  Along with Chastain’s portrayal of Sloane, this is the most valuable aspect of the film.  Viewing television coverage of the Lobbyist Jack Abramoff scandal in 2005 inspired Parera to write the script about lobbying. Independently, Chastain read Abramoff’s book in preparing for the role.  She also interviewed female lobbyists to guide her in portraying one of them.  The true-to-life quality of the film is likely a reflection of the Abramoff case and the additional research by Parera and Chastain.
Unfortunately, Director John Madden has chosen to use the ploy that seems to be a fad now in movie making, that of presenting events out of order in time.  Not only does this distract us from following a complex set of events and the import of Sloane’s rapid verbal output, it’s confusing for the viewer.  I was frustrated in not being able to process everything that is said by Sloane and her team.  Jumping around in time one has to spend a lot of attention on re-orienting.
Supporting cast deserve recognition for the excellent roles they play in the drama.  Gugu Mbitha-Raw in particular, eloquently shows the sensitivity of her character on one hand and a sharp investigator on the other.  Mark Strong and Sam Waterston live up to their fine reputations by playing CEOs of lobbying groups, along with their staff members Mark Stuhlberg and Alison Pitt.  Jake Lacy is perfect as a studly character available to single women.
Winning is the mantra in Miss Sloane, which we see as an all-important motivator for all the lobbyists, Sloane included.  Winning elections is key to survival for Congress members, hence their vulnerability to pressures coming from all sides.  But implicit in the story are questions about the costs sometimes involved in winning, whether that should always be a primary goal, and what happens to a person for whom that is a fundamental aim.

An exciting courtroom drama that has timely relevance.

Posted by donnarcopeland at 10:00 AM