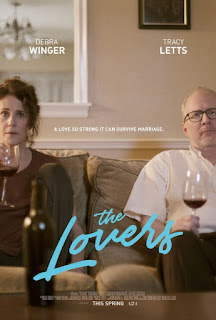 Breaking up is hard to do, and it’s shown to be so in spades for the couple in The Lovers.  Michael and Mary’s marriage is clearly on the rocks—and according to their son has been so for years.  They’ve reached a state of dispassionate regard for one another, neither seeming to realize that their partner is also having an affair.  But even under these circumstances, there is a lot of dithering about whether to go through with a separation or not.  And thanks to good writing and directing by Azazel Jacobs, suspense is sustained until the very end. Azazel’s story is an accurate reflection of reality for many couples today, so the viewer has no trouble getting into it and empathizing with all four actors.  On top of this, the film is also funny; you chuckle sometimes even when watching their misery along with their foibles.
Michael (Letts) appears to be a very unhappy man, hating his job, and not showing much of an interest in his college-age son, all of which shows up as lethargy, forgetfulness, and misspeaks.  Mary (Winger) always seems preoccupied, worried, and tense.  Each one, however, brightens up when they’re with their lovers, Michael with Lucy (Walters) and Mary with Robert (Gillen).  Both lovers are putting a lot of pressure on the spouses to talk to each other, but so much has been unspoken in their lives and there is enough of their initial attraction to one another, that this becomes a real stumbling block.
Tracy Letts shows the range of his acting skills in the character of Michael.  I don’t remember his playing someone quite as bumbling and inarticulate in his other roles, which are usually very authoritative (e.g., The Big Short and Indignation).  Here, he is able to look completely at sea.  Debra Winger captures her role as well, showing all the nuances of her emotions on her face.  Their chemistry as actors in all kinds of emotional states is readily apparent.  In their supporting roles, Gillen and Walters help enhance the whole production.
I was puzzled about the costume designs of Diaz, which seem downright ugly at times.  For instance, some of Mary’s work outfits clash and don’t appear to reflect her position at all.  Even the young couple visiting Michael and Mary are really toned down.
This film will likely be of interest primarily to those who have experienced divorce and/or a troubling marriage.  It illustrates so well the importance of communication among people who live together in a family, including the children.

An honest (including humorous) portrait of contemporary marriage.

Posted by donnarcopeland at 10:02 AM