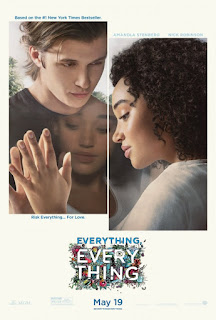 The film is based on a young adult novel by Nicola Yoon with a screenplay by J. Mills Goodloe, which, I gather, follows the book very closely.  After seeing it and regarding it as a pie-in-the-sky story about teenagers (which resembles more of a ten year-old’s fantasy to me), imagine my surprise to find the book has been so well received (4½ stars on Amazon) and judged to be one of the best books of the year.  It’s a completely fanciful tale about a girl with SCID (Severe Combined Immunodeficiency Disease) who has essentially lived in a bubble all her life.
Madeline’s mother, a physician, has constructed a beautiful room for her with a scenic view outdoors, and she spends her time reading, writing reviews, playing Scrabble with her mom, and exploring on the internet.  She has a nurse who is like a friend—her only friend.  When a family moves in next door, Madeline (Stenberg) watches from her window and notices a blonde boy her age.  This is Olly (Robinson), and they make eye contact, wave, and soon are texting back and forth.  He is friendly and playful, and Maddy, as he calls her, is very excited about having a friend her age to relate to.  Their friendship is facilitated by her nurse Carla (de la Reguera), but when Maddy’s mother finds out (after some of Maddy’s risky behavior), Carla is fired, and a regimented nurse takes her place.  This is too much for Maddy, and she decides to take matters into her own hands.
So much of this film strains credulity.  For instance, no one wears a mask or gown when they’re with Maddy, which I thought was always required for reverse isolation, and which I presume is what Maddy’s room is.  She tells us that items coming in are irradiated to remove any contaminants, but the mother and nurse come and go without seeming to change anything (oh, once we see Carla changing her shoes).
But really, the most inauthentic part of the film is the dialog between the two teenagers and the easy sociability of a girl who has lived her whole life essentially alone.  It’s hard to imagine how she could navigate the scenes she’s in after such an existence.
Portraying Maddy, Amanda Stenberg (Hunger Games) brings her character to life in a convincing performance that makes you believe in her and root for her.  Nick Robinson (The Kings of Summer, Jurassic World) as a boy who is supposed to be a bit awkward and from a troubled family shows his skill in his portrayal of the type of insecurity that comes from an abusive father, and with protective feelings for those he feels responsible for.  Supporting actors Anika Noni Rose and Ana de la Reguera fill out the cast nicely.
Everything, Everything is directed by three-time director Stella Meghie, and she should be pleased with her work here.  The detraction of the film for me is the screenplay’s unrealistic presentation of an illness and the portrayal of teenagers that lacks authenticity and believability.

Everything, Everything is too sweet and too “precious” to be what it wants to be.

Posted by donnarcopeland at 10:34 AM