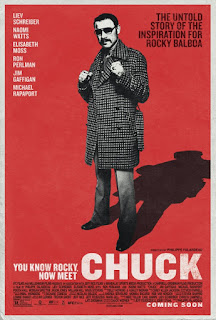 The story of Chuck is not much different from so many other sad boxing tales in the movies (e.g., The Fighter, Hands of Stone, Raging Bull) in which the fighter comes from humble origins, doesn’t mind getting hit, is persistent against all odds, gets bruised and bloodied in the ring, indulges in self-inflated trash talk, and after he has a success or two gets into serious trouble that threatens his career and destroys his family.  In fact, the fighter in Chuck, Chuck Wepner, is the real person on which the character in the movie Rocky is based.
Chuck (Schreiber) has such a reputation for getting beat up in the ring, his nickname is the “Bayonne [New Jersey] Bleeder.”  He never shows pain, and when his wife worries about him or his daughter draws a picture of his battered face, his response is always, “I don’t mind getting hit.”  Chuck’s wife Phyliss, beautifully played by the talented Elisabeth Moss, is supportive, comforting, and a good sport; that is, except in cases where his flirtatiousness exceeds the limits of her tolerance.
Everyone gets excited when Chuck’s trainer (Perlman) informs him that Don King, the influential boxing promoter, wants Muhammad Ali to fight a “white guy” at the world championship.  Chuck has won enough rounds with other fighters that he is considered and finally chosen to be that guy.  That’s enough to get his name on the map, because after the fight went through more rounds than was expected, Chuck became famous.
Thereafter, the story grows dark as Chuck has hopes of starring in Sylvester Stallone’s second Rocky picture.  (The first one was based on Chuck’s life, and even though he recognizes that it is actually the story of his life, he simply enjoys the compliment).  But by this time nightlife has done him in, and he fails to succeed in the audition.  He ends up being arrested for drug trafficking, and goes to prison.  That’s not the end of the story for Chuck, though.
The script and the direction of this film by Philippe Falardeau is well done, and the acting by Schreiber, Moss, Perlman, and Watts is especially good.  Watts doesn’t really figure in until toward the end of the story, so in the interest of not being a spoiler, I won’t go into that.  I will say that the film could have done a better job of folding her character into the plot early on so that what finally transpires is more plausible.
This seems to be a case where the movie is well done by all concerned, but because there have been so many predecessors telling the same tale, Chuck doesn’t have the punch (pun intended) to wow us as it may have intended.

Yes, another film about boxing, with the hero replicating his predecessors.