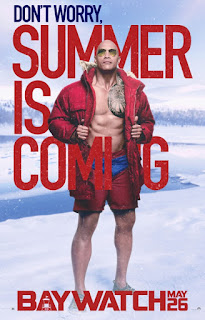 This is a fun romp in the sun with criminal intrigue mixed in.  Based on the TV show with the same name years ago (1989-2001), the contemporary film is able to accentuate the sexiness of the characters with more freedom, and inserts a major drama that is able to grab your attention and hold it.  Regarding the former, it does feel repetitive in the beginning with so many close-ups of backsides and cleavages and constant double entendres.  Some of the dialog is just too smart and glib to sound realistic.  Perhaps these are what make a movie sell, but I wish it weren’t so.
However, as the story gets going, the struggle between the lifeguard in charge, Mitch (Johnson), and the new recruit forced on him, Matt Brody (Efron), becomes an interesting male competition for dominance.  The beauty of this for me is the maturity with which Mitch responds to Matt’s anti-authority challenges, which not only contributes to the humor, but ultimately demonstrates how an authority figure can make/break such a person.  Director Seth Gordon and the other filmmakers enhance the comedy and suspense of the film by drawing this interaction out.
Major dramatic elements emerge as Mitch starts to discover packets of drugs on the beach, and feels entitled to investigate their source, although he is constrained by his boss, Captain Thorpe (Huebel), and the beach policeman, Sgt. Ellerbee (Abdul-Mateen II), to let it go and leave it to the police.  This is where the movie gets a little dicey in showing that the amateur lifeguards can do a better job of investigating than the police department; although, granted, there is corruption in city government involved, which is the filmmakers’ way out.
Part of the thrill of Baywatch is seeing the lifeguards achieving amazing rescues by virtue of their physical fitness, their rapid assessment of a crisis, their preparedness in meeting all kinds of emergencies, and their commitment to honor and service.  The other part is watching them solve mysteries and come up with clever ways to disrupt an ongoing criminal activity.
Dwane Johnson is in his element in this type of film, which requires a gorgeous physique, eloquent sarcasm, and a heart of gold.  Zac Efron is able to play all the different aspects of his character in Matt Brody—braggadocio, entitlement, belligerence, and, finally, humility.   It is refreshing to see the filmmakers giving just acclamation to the females on the team.  Rohrbach as CJ is sharp, competent and a true partner of Mitch.  Alexandria Daddario as Summer, a blonde babe, comes across as patient, understanding, and sharp—not your usual stereotype blonde.   I took to the beach policeman character played by Abdul-Mateen II, who is not the brightest bulb in the room, but has the capacity to recognize heroics and truth.  And the villain?  Priyanka Chopra has the look and feel of a female seductress with grandiose ambitions.  She qualifies.
Baywatch will please many who watch it, especially those who followed the television show; but it is updated in a way that will appeal to contemporary audiences who are drawn toward stars like Dwayne Johnson and Zac Efron, a bit of sexiness, and major intrigue.

Baywatch is titillating at first, but you will gradually be drawn into its intrigue.

Posted by donnarcopeland at 3:55 PM