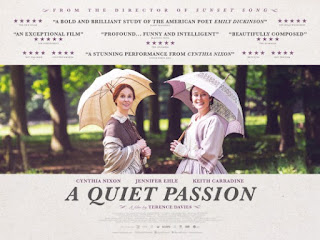 A quiet passion is not always so quiet, although it is an apt title to signify a woman whose passions ran so deep, her family had to calm her down repeatedly, after which she would try valiantly to keep those passions quiet.  In the end, she was always a stricter judge of herself than of others, and was praised for the depth of her soul and her honesty.
The American poet Emily Dickinson is stunningly captured by Cynthia Nixon in Terence       Davies’ dramatization of her life in A Quiet Passion.  As a female in the late 19th Century, she was sassy even as a child; but her cheek came from her intelligence and thoughtfulness.  The aim always seemed to be to gain knowledge rather than to be simply rebellious.  Her father (Carradine) was remarkably patient and permissive with her, yet he too felt like he had to set firm limits on her.  It was her sister Vinnie (Ehle) who was most effective in countering her arguments and mollifying her.
Terence Davies’ dialog in the film, helped along with Dickinson’s poetic inserts, is smart and sometimes wittily funny, such as this conversation between Emily and her friend Vryling (Bailey):  [Vryling] “In the long term, honesty is not the best policy.”  [Emily] “Is dishonesty?”  [Vryling] “I prefer to call it diplomacy.”
In his writing and direction, Davies gives us a vivid picture of the poet.  In addition to her pugnacity (Emily was outspoken about religion and her belief in God, marriage, male/female relationships, and death, for instance), she became increasingly reclusive as she got older and became more mystified about social manners and interactions.  She could be rude, but she clearly had a conscience, as when her sister Vinnie called her on it and when her father scolded her for being rude to the housekeeping staff.  “They’re our employees; not our servants”, he tells her.  She kisses him on his head, and he asks, “What’s that for?”  She answers, “For telling me the distinction”, after which she apologizes to the help, and tells them to keep the prize money for her loaf of bread that she’d won.  She became increasingly disillusioned with the world, referring to herself as a “no-hoper” who “knows best how to starve.”  She would say to Vinnie, “I long for something, but I’m afraid of it.”  In short, Emily Dickinson was a bundle of contradictions, yet had considerable insight about herself.
As noted, Cynthia Nixon gives an award-worthy performance in fitting herself so thoroughly and neatly into the poet’s character.  Supporting cast members, Jennifer Ehle, Keith Carradine, and Catherine Bailey add dramatic flavor to this fascinating story.  The artistic cinematography by Florian Hoffmeister shows many scenes which could be framed and stand alone as paintings.  One in particular is a view of a window with a vase of flowers, curtained by a fine, sheer fabric, behind which we can see and hear the minister giving his sermon.

A poetic rendering of images, dialog, music, and movement to convey the essence of Poet Emily Dickinson.