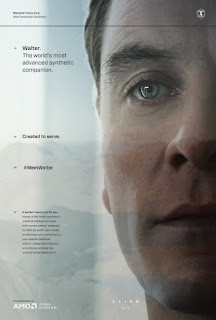 This version of Ridley Scott’s Alien series is to serve as an origin story, explaining how the alien came to be, and following up on his Prometheus production (2012), in which the origins of humankind were considered.  Alien:  Covenant elaborates on that theme and lets us know what happened to two of the characters that were in Prometheus and are now missing.
It helps to have seen the previous renditions of Scott’s Alien films before viewing Covenant because it explains the origin of the alien in the first Alien movie and some of the characters are referenced here, although it’s not entirely necessary.  This could stand alone as a sci-fi thriller in its own right, showing the dynamics of a group of people on a space ship for long periods of time, their encounters with another planet and the beings inhabiting it, and the fascinating subject of human-like robots in human society.
Captain Oram, taking over from the previous captain’s sudden death is an unsympathetic character who appears far too weak to lead such an important mission.  This character takes the prize for being the most annoying.  He has significant disagreements with Daniels (Waterston), the wife of the former captain and someone who is much more forceful in personality.  That she seems more artificial has less to do with her acting than with the script and direction.  The most effective and intriguing are the two robots both played by Michael Fassbender, on whom the whole story turns.  Fassbender is incredibly good at playing both, who are similar, but with subtle differences and very discrepant aims.
Exploring new worlds—especially in space—takes courage, and in Ridley Scott films moral grounding as well, because ethical choices crop up repeatedly.  One instance of that occurs when newly installed Captain Oram (Crudup) finds that the spaceship Covenant is near a planet showing life and the possibility of its being closer than the one they’re headed to, to start a settlement, prompts him to want to explore it.  Disagreeing, Daniels reasons that that would put too many of their crew and settlers at risk.  The dilemma is one of exploration with possibilities versus caution.  Another instance of critical choices occurs when Mother, the space ship’s computer, warns of dangers in getting too close to a planet where some of Covenant’s crew is already exploring, the pilots disagree about whether to go ahead or not.  But the spouse of one of the pilots is down there, and he insists on forging on down to save her.  Director Scott regards these dilemmas partly as a means to excite the viewer, but to elicit a certain amount of agony of conscience as well.
Fans of the previous Alien movies, will relish the appearance of the alien creatures in this film, their appearances heralded by an ominous bug entering the human’s ear or nose, then bursting forth in a bloody birth.  This takes place on the planet Oram insisted on exploring, and they are accounted for by the appearance of a familiar figure.  These encounters are the most exciting and frightening scenes in the film, culminating in a furious battle on the return ship toward home.

A very interesting account of the origin of the aliens in earlier pictures.