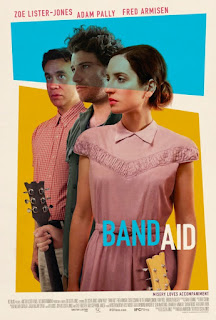 This is how a comedy should be:  Laugh out loud funny with substance and truth underneath.  Zoe Lister-Jones is the current wonder woman who has written, directed, produced, and starred in a groundbreaking (to me) film about a couple who fights constantly, and playfully come up with the solution to their problems.  I say “groundbreaking” because Lister-Jones gets so much of the psychology right.  It won’t be anything new to therapists who have understood this for a long time, but artistic expression to address real feelings and manage conflict is therapeutic.
Anna (Lister-Jones) and Ben (Pally) argue constantly about all kinds of things—dishes in the sink, complaining, laziness—and it seems hopeless for their marriage.  Then one day when they are attending a godchild’s party (to which they came simply as an obligation), out of boredom they sit in the sandbox, pick up toy instruments, and start playfully setting their fights to music.  It’s fun for them for the first time in months.  They gingerly try it again when they’re at the beach getting stoned.  They discover that “fighting” in song actually helps.  Later on, when they find their old guitars while cleaning out the garage they decide to be a band.
A neighbor drops by to chat and sees that they have guitars and have just formed a band.  He lets them know he plays drums, and waits expectantly for them to invite him to join them.  Awkward silence, so he leaves.  It’s not long, though, until the couple realizes they need a drummer, so they knock on his door.  All the scenes with Dave (Armisen) and his two roommates are so surprising and fun, despite a few believable rough spots, they put the film over the top in my opinion.
Cleverness, dialogue, and comedic timing make this film a winner.  Lister-Jones is truly gifted in all aspects of her creation, and I will always make sure I see her future work.  I assume she must have been primarily responsible for recruiting the cast (since I don’t see a “casting by” category on IMDB), because they are so in sync with her character, especially Adam Pally.  Like Lister-Jones, he has had considerable experience in writing, directing, and producing, as well as acting.  Fred Armisen is well known as a kind of odd-character comedian, and does some of his best work in this film.
The musical group Lucius scored the catchy tunes in Band Aid, but in collaboration with Lister-Jones.  She wrote the lyrics into the script, then worked with Kyle Forrester of Lucius on putting them to music.  She said in a Washington Times interview that she and Pally thoroughly rehearsed them, but “Fred needed no rehearsals because he’s like a legitimate drummer” (http://www.washingtontimes.com/news/2017/jun/12/zoe-lister-jones-writer-director-band-aid-hired-al/).
There is one more important discovery (with the help of Ben’s mother) the couple makes, which is the value of finding out what is really bothering them, talking about it, and grieving together.

An Indie film about marriage that includes a novel way to work through conflicts.

Posted by donnarcopeland at 12:37 PM