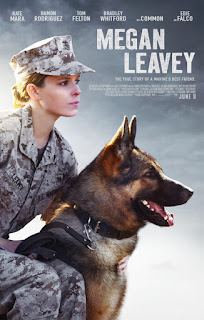 War is hell, but not just when it’s occurring; many fighters suffer the after-effects later, even dogs, as we see in this film.  Megan Leavey opens with a picture of a young woman at loose ends, seemingly not able to make it in life, a loser, partly because of lack of support at home.  Her parents are divorced, her father is in and out of the picture, and her mother is not the empathic kind.
In desperation—just to get out of town—Megan (Mara) joins the Marines, a strange choice which is not explained.  Her mother finds a brochure after Megan has already boarded the bus for boot training.  She continues to fail for a while, but after being disciplined (by having to clean out the dog cages) and learning that there are few/no breaks in military service, her gaze falls upon a particular aggressive dog named Rex.  The filmmaking beauty of this is how she connects with the dog at gut level.  He motivates her toward wanting to achieve, which she has never felt before.  She qualifies to be a dog trainer, and to her surprise and delight, Rex is assigned to her.  [This is probably a wry move on the part of her superior, Sergeant Gunny Martin (Common), maybe because she is a woman, maybe because he wants to test/challenge her.]
Megan manages to bond with Rex, train him properly, and before long they are sent to Iraq for a seven-month stint.  Another strength of the film is to demonstrate to naïve people like us what it’s like to search out the explosive IEDs.  In addition to the treacherousness of planted bombs, there may be artillery aimed right at them as they search.  At these times, Megan proves her mettle by insisting on resuming even after she and Rex have been wounded.
As relief from the warfare and chauvinistic attitudes toward women, we are given a little romance as Megan encounters Matt Morales (Rodriguez), another dog handler, he from New York like she, and they spar about the Giants vs. the Mets.
Other interactive scenes are with Megan and her mother and with Megan and her father (Whitford).  We see how conflicts with her mother crop up at every turn, even when Jackie (Falco) is trying to please Megan.  It’s clear that her relationship with her father is much more empathic.  He seems to know/recognize who Megan is and is able to reason with her, as in:  “All you gotta do is fight.  You know how to fight; you’re a Marine.”  And he is clearly proud of her.  He wants her to fight to be able to adopt Rex, which has become the primary aim in her life, but which the military is against.  This is a critical turn when it looks like Megan will revert to her previous self.
Kate Mara (who played Zoe Barnes in Netflix “House of Cards”) is a natural in playing Megan, and there is a remarkable resemblance with the real-life Megan, which is shown at the end of the film.  She makes Megan come alive in her dysphoria, underlying rage, and tenderness toward an animal.  Supporting cast of Falco, Whitford, Common, and Rodriguez are very strong.  Director Gabriela Cowperthwaite and writers Pamela Gray, Annie Mumolo, and Tim Lovestedt have created an inspiring and realistic story about the real-life Megan Leavey.
The film could have expanded more on Megan’s relationships with her father and with Morales; these are truncated and leave us wanting more.  But in terms of the aim of highlighting the complex relationship between a female Marine and a dog and their mutual healing, Megan Leavey is a success.

About a woman and a dog; worth seeing!