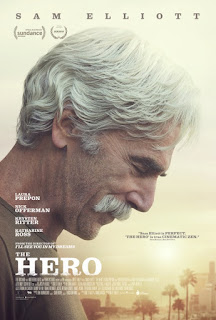 In this movie, the term ‘hero’ has layered connotations:  It refers to a movie that made Lee Hayden (Elliott) famous, it refers to the father in a film script he is auditioning for, it refers to Lee’s attempts to salvage his relationship with his daughter, and finally it refers to dealing with a life-threatening illness and facing with dignity the possibility of death.  Lee is different from the usual hero we encounter in movies; he is taciturn but sensitive; he shuns the spotlight, generously ceding his lifetime achievement award to a stranger; and is loathe to divulge to others the burden he is carrying.  Instead he copes in a low-key kind of way with alcohol and drugs he gets from a best friend Jeremy (Offerman), who’s also supportive.
It’s at Jeremy’s that Lee meets a client named Charlotte (Prepon), a much younger woman who is cheeky and outspoken.  Lee is attracted to her, partly because she challenges him, but also they are very different from one another, which appeals to him.  Whereas he is cautious and thoughtful, she is gregarious and impulsive and a little careless.  Although their first encounters are a bit awkward, they form a tenuous relationship that later gets threatened by something she does.
Director Brett Haley, co-wrote this script and I’ll See You in My Dreams with Marc Basch, and both films have the quality of being subdued, but still engaging enough to capture our interest and wonder how the story lines will turn out.  It’s a film provoking thoughtful consideration of the issues Lee is dealing with, issues that are likely to strike a touching chord in most viewers.  Hero continues the themes from Dreams about the complexities of emotional attachment, age differences in people’s perspectives, and living in the moment versus working toward goals.
Consistent with many roles he has taken in his acting career, Sam Elliott here portrays a character who is good looking with a distinctive resonant voice, and one who prefers a low-key life.   Most of the actor’s work has been in both television and movies, but although he is the lead in this film, he typically eschews leading man roles, and accolades he has received are for supporting character portrayals.  He prefers to keep his usual distinctive white hair and handlebar moustache in his movies, consistent with his preference for roles that are similar to him in real life.  He loves westerns because they have “something to do with integrity and a man’s word and honor and all that kind of stuff—values, morality…”  The part was written for him, and fits him hand-to-glove.
Early in her career Katherine Ross (Lee’s ex-wife in The Hero, but his actual wife in reality) won an Oscar, two Golden Globes and a BAFTA, but for some reason, she stayed away from feature films for ten years.  She still has a captivating presence on film without necessarily speaking very much, and as Val, she sets just the right tone when she encounters Lee.  Laura Prepon overacts a bit in her role as Charlotte, although it may be at Director Haley’s behest.  Krysten Ritter is just right as Lee’s daughter, with tones of longing, anger, and tenderness toward her father.  Offerman and Elliott have an easy camaraderie with one another, and their scenes represent strong, affectionate male bonding.
What appealed to me most about this film was the quiet drama unfolding in the lives of plausibly constructed characters and the playfulness of conveying many different meanings to the word ‘hero.’  I do object to what is now so prevalent in films—the over-use of alcohol and drugs.  I presume it’s related to filmmakers’ need for funding and the manufacturers’ benefitting from the coverage, but it’s not a good model at a time when we’re all urged to be more moderate in our consumption.

A quiet, contemplative film with a bit of comedy and romance to spice it up.