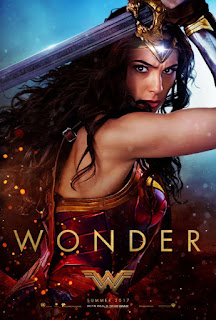 Wonder Woman is a delightful mix of female power with wisdom and compassion, intelligent action, thrills and intrigue of war, and amusing humor.  I especially like that Diana/Wonder Woman (Gadot) possesses these characteristics just within herself.  But beyond that, all the main characters illustrate these features at one time or another.  Steve Trevor (Pine) is certainly a hero with smarts, and his interactions with Wonder Woman are so funny at times, especially when mixing up his modern day sensibilities with her mythological spirit and sentiments.
Among the Amazons, Queen Hippolyta (Nielsen) and General Antiope (Wright) are strong figures who cherish and counsel the young Diana.   Other characters represent the value of doing one’s job, as Trevor’s secretary who goes where he says or does anything he tells her to, and Trevor’s three undercover agents (Bremner, Brave Rock, Taghmaoui) exercising their specialties with dedication and humor (i.e., the “Sharpshooter” Charlie (Bremner) also sings for entertainment).
Then there are the forces of evil:  Sir Patrick (a.k.a. the god Ares) (Thewlis), Maru, “Dr. Poison” (Anaya), and Nazi General Ludenoff (Huston).  They represent the kind of threat to the world that the Amazons have heard about and train for.  And they are truly evil in their intentions to sabotage peace in the world at all costs.  Currently, it will be in the form of a gas invented by Maru, against which, gas masks are futile.
Will Wonder Woman, Steve Trevor, and their allies be effective in forestalling the decimation of mankind?
In addition to being a thriller, Wonder Woman has substance in commentary about humankind, mythological references, the nature of war, and, perhaps, men (although the latter is disputable, in that women have not necessarily proven themselves yet in leadership with compassion).
Praise is due for Patty Jenkins in moving the genre of superheroes into more substantive material that goes beyond special effects.  Likewise, William Moulton Marston, the creator of the Wonder Woman character, should be praised for recognizing that girls need a heroine to overcome sexism in the genre.  He is the one who envisioned that magic and super strength needed to be accompanied by wisdom and compassion.
Gal Gadot appears to be a perfect choice for playing Wonder Woman, with her ravishing good looks (All men seem to fall at her feet, but the best line is “I’m both frightened and aroused” when she performs her heroic feats.) and athletic prowess combined with naïveté and single-minded purpose.  Chris Pine as well is able to combine an American boyishness with smarts and heroism.  Supporting cast as both the “good guys” and “bad guys” help make this film a winner.

Take your daughters to see this film.

Posted by donnarcopeland at 9:08 AM