HELL ON EARTH: THE FALL OF SYRIA AND THE RISE OF ISIS

Airing on the National Geographic Channel on Sunday, June 11, 2017 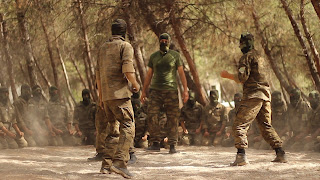 This documentary is a careful reconstruction of events in the Middle East leading up to the eventual interventions of the U.S. and Russia this year.  It articulates and gives coherence to a host of observations made by government officials and specialty journalists involved in that part of the world for years, highlighting specific events and other factors that allowed or encouraged ISIS to gain a foothold in the area.  This film organizes the opinions and observations into a coherent account.
Factors considered and explained include the so-called “Arab Spring” when protestors in a number of Middle Eastern countries began speaking against corruption in government, such as Tunisia, Egypt, and Libya.  When Bashar al-Assad of Syria began to take note of the protests he took action against the demonstrators in his country decisively and without restraint, including torturing and imprisoning kids.
Additional factors include the formation of the Free Syrian Army (FSA); special interest groups’ funding militias, which had abounded in the area, with no central control and sparking a civil war; Assad’s nonstop bombing of Aleppo with the assistance of Iran through Hezbollah; President Obama’s deciding not to take action when Syria began using chemical weapons; and the withdrawal of American troops from Iraq in 2011, giving Assad the opportunity to work with ISIS against the FSA.   Although in the beginning, ISIS was an Iraqi organization, it began a global reach by taking over villages and their businesses in Syria, instituting Sharia law, beheading resistors, and setting up training camps for all kinds of immigrants to join.
The film goes on to put ISIS’ actions into a historical context and outline further steps ISIS has taken to gain power, making Abu Bakr Al-Baghdadi its leader, making propaganda videos, and using social media to stir up fear as a way of controlling any resistance.
There are some hopeful signs, such as that ISIS has lost much of the territory and revenue that used to be under its control, the U.S. has made some airstrikes, and Iraqi and Kurdish armies have made some progress again ISIS.  Global effects of Assad’s and ISIS’ campaigns include the deaths of 400,000 Syrians; the displacement of over half of its population, and as a result, over one million are now refugees living in Europe.
Sebastian Junger (Restrepo) and Nick Quested have done an admirable job in organizing and presenting such a complex web of factors that helped ISIS along.  It’s a heartbreaking story in many ways (and it is R-rated for its disturbing images), but one that needs to be told to help us make sense of radicalism and what is happening to our world.

The disturbing story of how ISIS came to be.


Posted by donnarcopeland at 9:00 AM