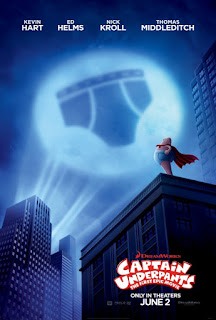 The setting of this animation of absolutely no value is grade school with a mean principal, Mr. Krupp (Helms) who has it in for two student cartoonists, George (Hart) and Harold (Middleditch), pranksters who constantly thwart Krupp’s efforts.  Of course, he is shown as being just as humorless and bad as the two pranksters are “funny.”  Funny is in quotes because the humor always has a scatological reference.  Let me list the words—you’ll be amazed that they could get this many into an 84-minute production:  Underpants (of course), toilet, toilet plunger, toilet paper, Uranus, peeing, farting, pooping, and diarrhea.  There’s even a Professor Poopypants (Kroll) and a farting symphony.  Not only is the principal disparaged in this film; so are school, science, and good students.
The basic premise of the plot is that mean Mr. Krupp threatens to put George and Harold into separate classrooms, which they’re convinced will destroy their friendship forever.  In desperation, they snoop around his office and find some of their things, which Mr. Krupp had confiscated, like a “hypnosis ring.”  With it, they’re able to put him in a trance, which transforms him by removing his clothes and putting him into underpants and a red cape.  An unanticipated side effect is that he thinks he’s a superhero and they start calling him “Captain Underpants.”  In this role he’s seen as partly a dumb fool and partly more heroic than he is in his natural state.  Anytime he starts transforming back into the principal, the two boys simply snap their fingers and sing “Tra-la-la”, and he’s in his underpants and cape again.
Mixed into the plot is a mad scientist (Kroll) with a German accent and a hairdo that looks like a wild Einstein who gets hired to teach science.  He is Professor Poopypants, with fantasies of revenge for being imprisoned, and one of his efforts is to wipe out all laughter in the world.  This will clearly impede George’s and Harold’s comic book business, so they team up with Captain Underpants to try to destroy Poopypants.
The ending is predictable.
This film will appeal to five year-olds who are still in the giggly potty humor phase, but it gets very tiresome for other ages—particularly those who are mature—and it is devoid of any helpful, positive qualities for children.

This is for those who still think potty jokes are funny.