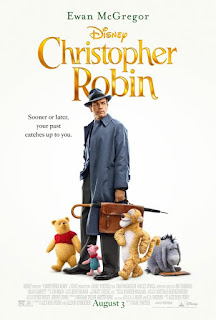 A clever blending of fantasy and reality makes this film engaging and funny, while still honing in on an essential need for children and adults—that of play and of staying in touch with the childhood experience.  Grown-up Christopher Robin (sympathetically played by Ewan McGregor) is being overworked and de-valued at the Winslow Luggage Company where he is an efficiency manager.  Although he doesn’t live up to his own counsel for other people, Robin’s boss, Giles Winslow (Glass), thoughtlessly keeps urging Robin to work harder and make sacrifices for the company.
In this sense, Robin is a pushover, only meekly protesting and eventually giving in to his boss at the expense of family time and leisure.  He is a workaholic who doesn’t even like his job very much, and he is starting to simply “go through the motions” with his wife and daughter.  Evelyn (Atwell) reasons very convincingly in wanting him to take a different perspective on life, but Christopher ignores her.  Even his daughter Madeline (Carmichael) cannot pull his heartstrings to devote some time for her.  When he does make attempts, it is clear that he is clueless and has lost any sense of what childhood is—or should be.  Tellingly, he keeps pushing Madeline to work harder at her studies so she can go to a boarding school where she herself doesn’t want to go.
This is all the set-up for the major thrust of Christopher Robin, which is adventures for all, with little homespun truths coming now and then from Winnie the Pooh (Cummings).  The above is all “reality”, and a bit dull until Robin and Pooh happen upon each other in one of their old haunts.  Thereafter, the story takes a quick left and we become reacquainted with the characters in the Hundred Acre Wood.  In addition to Pooh, there are Eeyore (Garrett) the endearing pessimist, Tigger (Cummings) the frolicking optimist, Piglet, Owl, and the rest of the “Winnie the Pooh” beguiling gang that children everywhere have loved.
Not all films of this type (elaboration of beloved children’s stories) succeed, but this one expertly directed by Marc Forster should be a hit with children and adults.  It has internal validity in projecting how the sincere young Christopher, who always wants to do good (as in pleasing adults) is, as an adult, taken in by a taskmaster and exploited.  It illustrates how far away he has grown from that imaginative, affectionate, spontaneous youth he once was.
Who helps him get back in touch and make some revisions in his life, and how, is the crux of this tale.  The impressively seamless transition from childhood to adulthood may be attributed to the screenwriters (Alex Ross Perry, Tom McCarthy, and Allison Schroeder) who have written a continuing story that could logically and developmentally follow from the original works and characters conceived of by A. A. Milne and Ernest Shepard.  It is likely that Tom McCarthy has provided much of the substance in the material because of how it resembles in tone and thoughtfulness his earlier successes (Win Win, The Station Agent, The Visitor, Spotlight, and Up).  He has a way of mixing wisdom, humor, and emotion into a story in the most delightful way.
Partly because of this, Christopher Robin the movie retains much of Milne’s original charm and humor with Pooh’s wise pronouncements [such as, that doing nothing sometimes achieves better results than doing something] and the other Milne characters’ humorously doing what they’re remembered best for.

Christopher Robin has grown up, but still needs some helpful guidance from Pooh and his old friends.