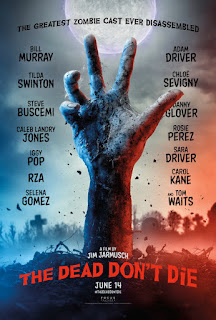 Normally, I love Jim Jarmusch films (Only Lovers Left Alive, Paterson, Coffee and Cigarettes, e.g.), but although The Dead Don’t Die starts out rather interesting—primarily because of the characters introduced and the wry humor—but when the zombies arrive…and stay on and on…the script becomes repetitive and surprisingly boring, even though the low-key humor is still sprinkled liberally throughout.
The most entertaining part of the movie is the group of small-town Centerville characters that include Chief of Police Robertson (Murray), his deputy Ronnie Peterson (Driver), hermit Bob (Waits), farmer Miller (Buscemi), and hardware store owner Hank (Glover); but the standout is Zelda Winston (Swinton), the Samurai sword wielding funeral director of the Ever After Funeral Home and computer expert.
All is quiet and the usual peaceful in Centerville until strange things start happening.  It stays light more than usual, electronics don’t work like they’re supposed to, the same song keeps playing on the radio…and then zombies start appearing and proliferating, doing their thing.
It seems to be a well-known fact of zombie lore that to rid yourself of a zombie, you must “kill the head.”  Zelda has nothing to fear when she goes outside because of her unfailing aim. Ronnie is the only other one to have had some training in the past, but he can also wield a sword effectively. Robertson is good at blasting heads with a shotgun.  So how will it all turn out when zombies—even those recently departed—start appearing everywhere?  To quote Ronnie, “This is all gonna end badly”, but is he right?  Will everything turn out OK?  With some prompting, Robertson reassures dispatcher Mindy Morrison (Sevigny) of just that.
Writer/director Jarmusch’s intention may be to highlight the narrator, who happens to be the hermit Bob.  From his comments on what he observes through his binoculars, we get the impression that Bob is fully informed about what is going on in the world—including in nature—and comes to certain conclusions.  He makes pronouncements from time to time that could be seen as a commentary about contemporary society, with its penchant for material acquisitions at the expense of environmental and humane values.
Which prompts us to ask,  “Are we the people the zombies of today who have the potential to kill off whole species—including our own—because of misplaced desires?  If so, does Jarmusch mean that “the head” must be dealt with for us to save ourselves?
This is a film that doesn’t seem to amount to much on the surface, but thoughtful reflection may turn up seeds of wisdom.

Not your usual zombie move, but one that provides food for thought.

Posted by donnarcopeland at 12:08 PM