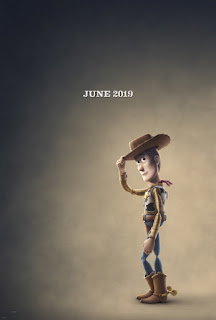 After the toys have said goodbye to their previous child, Andy, they are getting used to their new child, Bonnie (Hahn).  Woody (Hanks) is hurt that he is not the favorite toy for Bonnie like he was for Andy, but he still has protective feelings toward her, as he has come to have toward all the toys.  It’s kindergarten time for Bonnie, but she is loath to go. Woody sees that she will need his help, so stows away in her backpack to keep an eye on her.  Sure enough, after her parents leave, Bonnie is sad, and when a boy shuns her and grabs her art materials, she is really about to cry.  Woody steps up, rummages through the trashcan, and finds materials she can use to make something. It turns out, he has thrown on Bonnie’s table a fork and other little things like plastic eyeballs which she promptly makes into a toy.  She is so pleased and proud, she names her toy “Forky”.
The problem is, Forky (Hale) doesn’t want to be a toy (something foreign to him) and keeps charging back to any trashcan he can find.  This will now be Woody’s primary responsibility:  Retrieving Forky for Bonnie every time he runs away. He also has to teach him many things about his new world.  Adventures follow when Bonnie’s family takes a trip in an RV, ending up at a park with a carnival.  Woody’s job is cut out for him, as Bonnie has become so attached to Forky and he keeps running away.  Not only are there adventures and challenges on the road and at the carnival, some of the scariest moments take place in an antique store!  Woody goes to the store when he recognizes a lamp in the window that reminds him of his old friend Bo Peep (Potts).
Toy Story 4 comes through for children in its addressing—and making an adventure of—some of their deepest fears (abandonment, uselessness, rejection) and the means of coping with them (asking for help, turning to friends, being loyal to one’s own people).  Normal fears are countered with encouragement (“C’mon, you can do this!”) and, sometimes, (“Let it go; it’s not important”). And, ultimately, the film models the value in taking calculated risks in life for the goals of exploration of self and the world, and letting go of comfort and security, at least temporarily.  I have to admit that “Yes, we can-ada!” brought a smile to my face every time.
Director Josh Cooley lives up to his reputation for Inside Out, Up, and Rataouille in making a film that is appealing to children and adults and, most importantly, speaking to children about important issues.  Production design by Bob Pauley and music by Randy Newman—along with the excellent cast—make this follow-up to previous Toy Storyiterations worthwhile.
Cooley and the producers must have had unbelievable influence to pull in A-list actors like Tom Hanks, Keanu Reeves, Jordan Peele, Annie Potts, Mel Brooks, Joan Cusack, Tim Allen, Laurie Metcalf, and Betty White for voicing the major characters.  Music by Randy Newman and production design by Bob Pauley, along with the animation and art crews boost the production to high quality film—shocking for a fourth version of a movie.  Cheers to Pixar and Walt Disney Pictures.

An adventurous, fun children’s movie with substantive messages for kids, and still entertaining for adults.

Posted by donnarcopeland at 8:13 AM