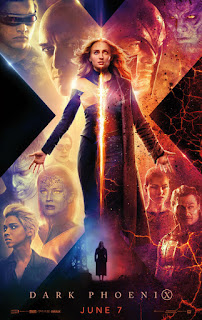 Enter the world of super powers where the X-Men need only concentrate—perhaps with furrowed brows and taut faces—and the most formidable foe or metal structure can be violently repelled or disintegrated into a puff of smoke.  When you get a whole cast with these powers it can be dizzying, but that doesn’t keep you from being engaged in the story.
Jean is a child in the back seat of her parents’ car tooling down the highway, complaining about the music they’re listening to.  Suddenly she’s in a hospital asking where her parents are. Dr. Charles Xavier (McAvoy) appears and gently verifies her fears that her parents are dead.  It will be OK; Dr. Xavier has a school that might be just right for her, since she is “special” (which she scoffs at). But seriously, he says, it’s a place where children are taught to take pride in their differentness.  It’s clear from this short introduction that Jean has realized that she is different, and can harm others, so despite her misgivings—which voices later on—she agrees to enroll in the school.
That’s Jean’s childhood; now she is almost grown up (played by Sophie Turner) and has joined the Xavier’s X-Men, albeit still in training.  She’s chosen to go with the group to rescue the NASA space flight of Endeavor, which has run into trouble.  During this mission, she is asked to do a heroic save in the last few seconds, and it’s apparent when she barely escapes with her life that she is changed.  That is, her powers are much stronger.
How this happened is a puzzle, although another character later on explains that “it” was given to her for a specific purpose.  The rest of the story is about these powers and the havoc they create for Jean, along with anyone around her.  The story hearkens back to Dr. Xavier’s when he first met Jean; that is, that such “gifts” to someone can be used for good or ill.  The person receiving them can make the decision as to how to exert them.  Although Dr. Xavier will be discredited from time to time, many of his principles will come back to Jean when she is in dire turmoil and pulled in two directions.
Directed and co-written by Simon Kinberg, who was a producer on previous X-men films (X-Men:  Apocalypse, X-Men:  Days of Future Past, X-Men:  First Class), the film moves along at a fast clip, doesn’t overstay its welcome (less than two hours long), and incorporates substantive moral/ethical issues and emotional truths into an engaging story.  That is, it depicts remorse for mistakes, tensions around the use of power, the importance of “family”—however constituted—and the construction of an identity that “fits.”
Following her “Game of Thrones” success as a girl/woman undergoing numerous transformations, Sophie Turner proves she is ready for big-time movies and a starring role.  Aided by creative special effects, as Jean she is transformed into a “phoenix” (mythologically, a bird that regenerates) with powers that overwhelm her at first until she can figure them out.  Here, her upbringing—such as it was—will guide her in making decisions about who she wants to be.  Turner personifies these subtleties in good and evil to a tee.
An unnamed character, a deliciously evil being without a soul and preoccupied with a quest for power, then appears to try to swing the odds.  She has in mind to use Jean to resurrect the power of a race in decline.  Jean has been a surprise all along, so we wonder what she will do…
Fine casting strengthens this film’s success in storytelling.  James McAvoy embodies the person who has achieved acclaim but has to come to terms with mistakes he’s made.  The remorse shown is palpable.  Michael Fassbender’s initial befuddlement and subsequent resolve helps keep the tension at an optimum level, and supporting actors, Nicholas Hoult, Tye Sheridan, and Kodie-Smit-McPhee contribute significantly to the drama.
Although knowledge of previous X-Men films will help in making sense of this rendition, it’s not a strict necessity, except perhaps in identifying the characters.

An exciting journey into the X-Men universe, with women holding their own—even starring.

Posted by donnarcopeland at 2:35 PM