THE FALL OF THE AMERICAN EMPIRE 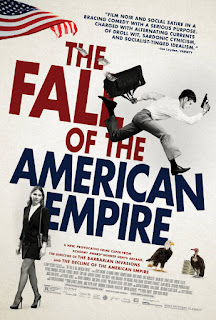 Nowadays, we seldom get an intelligent comedy—not only in the sense of being well constructed—but one sprinkled throughout with philosophical and literary references that are to the point yet still funny, at least in the way the main character quotes them, and to whom (like a bank teller who hasn’t the foggiest notion of what he’s talking about).  Witty statements and unexpected encounters will make you chuckle throughout the film, e.g., “Help me; I have too much money” and “I’m a delivery man with a Ph.D. because I earn more money driving a truck than I would teaching.”
Alexandre Landry is key to the film’s appeal and success in his character as Pierre-Paul, who has a PhD in philosophy and has succeeded in internalizing his lofty education and applying it to the practicalities of contemporary life. That is, he quotes John-Paul Sartre, Martin Heidegger, and Jonathan Swift in one short conversation when he’s explaining how he looks at life today.  But he’s not just an intellectual nerd; the man volunteers at a homeless shelter where he has real conversations with the people there and genuinely seems to care about them and their stories.  His sincerity contrasts with the cynicism and duplicity shown by others.  Landry successfully pulls off the character of a well-educated man who can relate to everyone he meets and is still open to and chasing after new experiences.  (I figure most women will have a crush on him and his boyish charm and good heart by the end of the film.)
The story is a cat-and-mouse game concerning a large amount of money being stolen, with both the police and gangsters trying to track it down.  When Pierre-Paul, the philosopher, is confronted with the temptation of large sums of money dropped in bags at the crime scene—where he just happened to be—this record-free good citizen succumbs, and stuffs two enormous bags into his delivery truck.  What happens to that huge amount of cash forms the central plot of the film.
In the process of Pierre-Paul safe-keeping the cash and using an ex-convict (Curzi) an elegant call girl (Morin), and an esteemed hedge-fund investor to dispense with the money, writer-director Denys Arcand weaves in points about economic inequality, off-shore accounts and tax avoidance, immigration, and police misconduct in a riveting tale where the police and gangsters are constantly trailing the suspects (and doing horrible violence in some cases), but where social values pre-empt the nefarious strategies of law and crime.
Arcand injects optimistic notes into his condemnations, like the generosity of lowly people versus the wealthy and the possibility of reform for ex-cons and call girls.  His basic message is about the corruption of values in favor of money that has led to the fall of the American empire, but he is not restricting it to the United States. The setting of the film is in Montreal, Canada.
Much of the subtle intellectual humor may be lost on most viewers, but I found it deliciously entertaining, although a tad too long.

Writer-director Arcand submits an impressive follow-up to his previous films (The Decline of the American Empire, The Barbarian Invasions, and Jesus of Montreal).