THE SECRET LIFE OF PETS 2 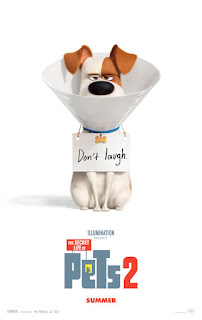 Whereas in the first rendition of The Secret Life of Pets, a relatively simple story with lots of excitement is told, in Secret Life 2, the filmmakers opted to have three loosely related story plots alternating with one another.  One story is about the main character Max having to adjust to his owner’s new baby and going for a visit to a farm where he encounters an intimidating bigger dog named “Rooster” (Ford), although Rooster isa dog.  Another is about Max’s friend Gidget (Slate) trying to retrieve Max’s favorite toy, “busy bee”—which he entrusts her with while he is out of town—when it bounces away and ends up in a cat-filled apartment.  The third story is about Snowball (Hart) feeling like a super hero when his owner dresses him up in an action figure costume, and his friend Daisy (Haddish) asks him for help in rescuing a circus tiger from its abusive trainer Sergei (Kroll).
In my opinion, this structure becomes a near fatal flaw, because it fragments the plot and literally lurches through three very different settings and intrigues. Max is trying to brave it up on the farm; Gidget and her friend Chloe (Bell) are frantically trying to wrest “busy bee” from one huge snarling cat in a house full of cats, and Snowball and Daisy become action figures in outwitting and outfighting the evil Sergei for the tiger. Try as the filmmakers might, the three stories don’t really come together in the end; we just get a sample of endless chases modeled after adult action movies.  Bravery seems to be the element tying all this together, but by the end, we feel like we’ve seen three different movie shorts.
The actors voicing the animals do a great job highlighting their characters’ personalities (Harrison Ford, Tiffany Haddish, and Nick Kroll are welcome additions to the first team), the animation and special effects are entertaining, and Alexandre Desplat’s music is an apt accompaniment.
Children in the screening I attended giggled and laughed at expected times and seemed to enjoy the film overall; I just wonder how well the younger ones especially followed and kept track of the three plots.

Another peek into the pet world, where challenges and intrigues are aplenty.