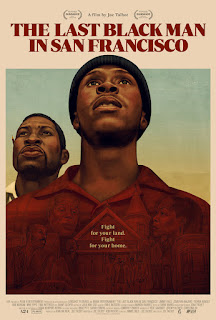 You will be surprised when you go see this film; it is oozing with creativity from start to finish.  It felt to me like I was captured by a painting set to music, luckily for me, there is someone close by who tells me a story about it.
Opening scenes give full vent to the music by Emile Mosseri (modern brass sounds at first, then Greek and operatic choruses and popular tunes later) and cinematography by Adam Newport (stunning portraits of 19thcentury houses with the sea as a backdrop, and later with close-ups of expressive faces and other captivating scenes).  Two young men wait for a bus that may not arrive while they listen skeptically to a street preacher.  The script blithely trips along as it wends its way along the streets of San Francisco, occasionally with tinges of nostalgia, but mostly with the bustling of teeming humanity and sometimes jeering clutches of black men jiving with each other under a shade tree.
The two men waiting for the bus, Jimmie and Mont, play the two leads in the film, expertly rendered by Jimmie Fails and Jonathan Majors.  They make cynical, half funny observations of what is going on around them, with most of their focus being on a particular house that Jimmie says was built by his grandfather.  He and his parents lived there, but had to leave abruptly and the family split up, with Jimmie being sent to a home.  Mont draws scenes and people around him continuously with the intention of writing a play.  Jimmie maintains a sense of ownership toward the house, even taking it upon himself to do minor handyman jobs and making plans for the garden—to the dismay of the white woman living there.
Until one day, it becomes obvious that the house is empty.  Jimmie sees this as a dream come true, and he and Mont settle into it on the assumption that it will be their home.  As the story proceeds, it becomes imminently clear that Jimmie is a dreamer and that the house carries such a weight of symbolic meaning for him, that he will pursue it regardless of anything else.  This seems to be the crux of the film: Dreams that, as impossible as they may appear, can sustain a person—and someone close to him—through all kinds of obstacles.  As viewers, we latch on as well, and become comfortable in the house.
The metaphor of a dream extends to the images of waiting on a bus that may or may not come.  Does one continue to wait patiently, or take it upon oneself to skateboard to the destination? Either way, the dream may still live on.
Along with its many qualities, The Last Black Man in San Francisco goes against stereotype by depicting two black men who are gentle in spirit and in deed.  No matter what is going on in the film, when they are in a scene, it is peaceful and relaxed.  Well, except for times of extreme frustration, when feelings may be vented violently, but on a skateboard.  The connection between the men continues as a puzzle—it’s unclear exactly the nature of their relationship—which is another aspect that keeps us engaged, to the film’s credit in its expertise of intrigue and ambiguity.
How much do I love this film?  I think you can guess that I am entirely smitten with its broad expanse of artistic representation of the human condition and our urban environment, its visual and auditory pleasures, its commentary about dreams, and a unique view of homelessness that is unmatched.

Very likely to be my best film of the year for its sheer creativity mixed with realism.