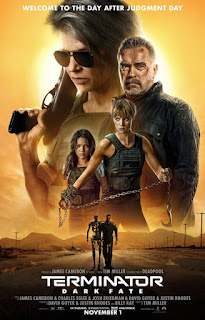 Opening the film is an apparently normal teenager in Mexico making out with her boyfriend in an isolated area when they see a woman fall off a high bridge. They investigate and determine that she needs medical help, but when they’re approaching potential assistance from policemen who have appeared, they’re seen as suspicious and the police are ready to take them in.  But something amazing happens.
Be prepared.  Shortly after that, this film directed by Tim Miller, a special effects artist, proceeds with a half-hour(?) of that which is dear to his heart:  All kinds of vehicles (including a plow truck driven by an AI and a pick-up driven by a modified human with a mission) sensationally chasing and crashing into one another on freeways and country roads, with the AI having the ability to throw out a black tar-like substance that magically transforms into a weapon and even his own reconstitution.
Gradually we hear about the background leading up to this moment.  Cryptically, Grace (modified human majestically portrayed by Mackenzie Davis) has been sent to protect Dani, the teenager (Natalia Reyes), from the AI Rev-9 Terminator (stoically played by Gabriel Luna). They will meet up with characters from previous renditions of the Terminator, a grieving Sarah Connor (Hamilton) and her nemesis T-800 (Schwarzenegger).
It continues the Terminator theme of man vs. machines, with the message that even though it seems like a losing battle, one should never give up hope of human supremacy.  In the dream world created by the screenwriters of this gem (David S. Goyer, Justin Rhodes, and Billy Ray), where anything can happen and need not have a smidgen of reality or logic attached to it, yes, they can make it happen.  The only problem is that the writers’ imagination is not very imaginative and the dialog is so trite, that after 2+ hours the film becomes tedious to watch:  It’s essentially a series of special effects.
Inconsistencies that can be bothersome to a viewer based in reality are frequent, such as Grace being able to bound 50 feet into the air and swoop down with the speed of lightning, but when boarding a train, she walks gingerly up the steps. Sometimes the characters do miraculous feats, yet other times, those same feats are not available to them.
One of my biggest problems with the film is the glorification of guns, even though they’re often shown to be woefully ineffective.  Still, what is shown is meant to appeal to gun-rights champions.  The joke was on me at one point when the small group of fleers realizes they need weapons—lots of them.  It’s then revealed they’re in Texas, and I laughed, not catching on (thanks to my colleague) to the fact that many in the audience were laughing for opposite reasons than I was.  Was it a laugh at or a laugh with Texas?
The only sequence of substance that I picked up on was T-800 Terminator (Schwarzenegger) describing what transpired in him after he became inactive.  He spent the time learning to be human, i.e., having a purpose, seeing the value of caring for others; and learning what a conscience is, which he acts out behaviorally even though the experience is beyond him.  This is a clever bridge between technology and humanity.
This film is obviously for viewers who love an emphasis on special effects and are less interested in human interactions and the value of well-written dialog that illuminates beyond thrills and chills.

Terminator devotees will likely find the film satisfying; others are likely to find it tedious and boring.

Posted by donnarcopeland at 10:59 AM