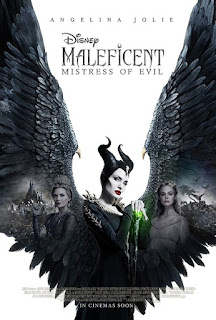 Fairy tale land—one never knows what to expect as to what will come up.  In this version following on the previous Maleficent (2014) (both starring by Angelina Jolie in the title role), her goddaughter Aurora (Fanning) is grown up and falling in love with Prince Philip (Dickinson).  As expected, he has fallen in love with the son of the King and Queen of Ulstead, a human tribe with a history of conflict with the Moors, Maleficent’s land of the fairies.  An awkward dinner takes place initiated by Philip’s mother, Queen Ingrith.
Maleficent is reluctant to go, but for the sake of Aurora, she agrees, and they all come together; but tensions abound, as happens when two very different cultures eat together.  Major conflicts ensue, with misunderstandings and subterfuge aplenty, and suddenly Maleficent disappears.  Where she goes propels the story forward and gives us insight into her origins and an explanation for what is to appear in the rest of the film.
As before, Jolie embodies her character in all its dimensions and power, and Fanning provides balance in her tenderness and rationality.  Although she is a good actress, Michelle Pfeiffer as Queen Ingrith seems miscast in that she simply doesn’t come across strongly enough with the qualities called for by her character.  I can’t say any more so as not to spoil the plot.  Harris Dickinson as Prince Philip didn’t wow me as someone heroic, but I assume that is a function of the script, and the same goes for Robert Lindsay as King John.  Ed Skrein as Borra (one of Maleficent’s newly discovered tribe) is the only male who is a counterpart to Jolie’s and Pfeiffer’s female characters in strength.
To me, the problems arising during this tale are related primarily to the unsuccessful attempt to insert actions that are clearly contemporary into a fairy tale. One example is Aurora coaching her mother on social manners.  Now, sophisticated Maleficent has been around the whole world and is familiar with such things as social graces, so having it seem as if she is being coached on what to do at a dinner party seems laughable.  I had the same impression when Aurora’s simple “woodsy” dress at one point is magically changed by Maleficent to one that looks like a contemporary Neiman Marcus creation.  Just as in the earlier film, the viewer is yanked back and forth between the fairy world and our reality-based one.
As before in the 2014 version, the opening scenes in this sequel are so dark it’s impossible to know what is going on.  There is a battle, but who is who cannot be distinguished.  I still don’t know who the warring parties are.
Finally, there is a disconnect between the ending of the earlier film and the beginning of this one in which Maleficent seems to have reverted to her previous maliciousness.  No explanation is given for this, or perhaps the viewers are just being led down a garden path. (More jerking around.)
This second Maleficent doesn’t measure up to the first one, which is too bad, since there was an opportunity here to tell a story like a fairy tale that speaks to contemporary concerns (e.g., war vs. peace). But the way war and peace are dealt with here is no different from…how many movies and actual events?
In the end, it’s not clear whom this film was made for other than the pockets of those invested in it monetarily.  Much of the story as presented will go over the heads of most children; and it is likely to be simplistic (meaningless?) to many adults.

If you love a good fairy tale, stay away from this one.

Posted by donnarcopeland at 7:51 AM