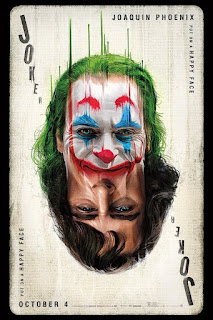 This is truly a creepy movie.  To the film’s credit, even from the beginning, I had a cloying, uncomfortable feeling primarily related to Phoenix’s character, Arthur Fleck, aka the Joker.  His portrayal—excepting the sometimes over-dramatization—essentially captures the psychosis he portrays, not only in the “craziness”, but as well in the selective kindnesses and gentleness he sometimes chooses.  The story is eloquent when it shows that time and again, people do not recognize Arthur’s lethality, dismissing him as “just quirky.”  His impassioned speech toward the end about being ignored, not seen, not given credence is, often, reality-based for people considered odd by most others.
In addition to Phoenix’s uncannily accurate, award-worthy portrayal, the origin story is one of the film’s strongest points.  Director Todd Phillips and co-writer Scott Silver were perhaps acquainted with preconditions that could produce a character like the Joker, and they have come up with a good example.  It would be a spoiler to go into much detail, so I won’t say any more than that, except to quote the Joker’s musing, “My whole life I didn’t know if I really existed.”
Joker tells a story about a misfit who has a medical condition that involves laughing or crying uncontrollably (yes, I looked it up and there is such a condition, Pseudobulbar Affect).  The irony is that this joker is, indeed, not usually very funny, but aspires to be a stand-up comedian.  His compromised mother (Conroy) specifically asks him why he wants that job “because, you’re not funny.”  He works for a company that hires out clowns, and is assigned to be a clown at a local pediatrics unit in a hospital.  He’s very successful until… and then he is fired from his job.
Desperate, he tries his calling at being a stand-up comedian, attracting the attention of a talk-show host, Murray Franklin (De Niro).  Franklin’s show was not to be missed by Arthur and his mother (for fantastical reasons as much as entertainment), and Arthur has had fantasies of actually being on it.  His mother also has significant fantasies about its host, Murray Franklin (De Niro).  Sure enough, when it turns out that Fleck’s performance failure at stand-up receives praise on social media, Franklin asks him to make an appearance on his show. This is a culmination of all that Arthur has dreamed of, but by this time in the movie the viewer will have justified apprehension.
The Joker has been featured in many DC Comics presentations, and this attempt to reveal an origin story can easily stand on its own for the viewer; one needn’t have seen all the previous renditions.  As well as the film has done what it set out to do, there are a few reality-check moments that don’t work and coincidences in the story that may be a little over the top, such as Arthur being able to keep his job as a clown as long as he did and his path crossing so many times with wealthy benefactor Thomas Wayne (Cullen).  Additionally, his brief relationship with Sophie (Beetz)—as well acted as it is—is preposterous.
On the whole, I really got into this film for the drama and psychology, and appreciate its commentary about the consequences of the ever-widening gap between the wealthy and the middle-lower classes.  The clown as a metaphor is brilliantly played out in a thriller as well as a wake-up call to contemporary times (e.g., widening gaps between the haves and have-nots, urban decay, and guns in the hands of the mentally unstable).

Is the Joker a joke or a powerful metaphor?