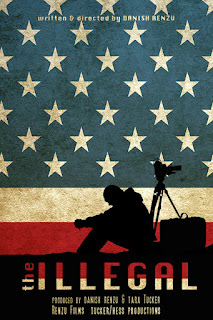 Immigration and legal status of immigrants is a sensitive issue in the U.S. nowadays, and this film illustrates the extraordinary trials such people may have to go through in the application process—and even then it’s not a certainty; multiple snags can occur and the whole plan may fall through anywhere along the way.
This is a story from a young Indian’s point of view.  Filmmaking has always been what gives Hassan’s life meaning. When he finally gets accepted at an American university in film, he manages to get loans, and arrives full of hope with the expectation of staying with his uncle’s family.  On his first night in their home, however, he overhears a conversation that informs him of the uncle’s duplicity; the family doesn’t really have room for him.
Hassan (Sharma) is never one to impose in any way, so he sets out the next morning to make other arrangements, and at the end of an exhausting day, slumps down on a street bench with all his luggage, fighting disillusionment.  An astute, empathic waiter at an Indian restaurant sees him there and immediately surmises the story.  Having been in a similar predicament years earlier, Babaji (Theba) invites him in, gives him a meal, and serves as a constant, benevolent father figure from then on.  (The kindness of strangers!)
But Babaji has his own burdens, and Hassan will have to figure out and solve any number of practical problems that will arise.  He’s a quick learner, hard working, and honest, but through no fault of his own (except maybe a little), difficulties crop up like weeds in a garden.  On the first day of classes, he is told to divest himself of a job, a girlfriend, anything that will stand in the way of the 24-7 that a degree in film will require.  Of course, he has to have a job in order to survive, and he will eventually meet a woman (Masi) who seems like someone of his dreams.  These are only some of the obstacles that Hassan will have to overcome, either by solving or compromising, along with stresses occurring at home that he can do nothing about.
Director Danish Renzu and his co-writers (Tara Tucker, et al.) present an eloquent picture of the practical and emotional demands made upon someone like Hassan. It’s entertaining, moving, suspenseful, and with characters viewers will come to care for and appreciate. Eric Neveux’s music enhances the story in all its wanderings and variable situations.
Suraj Sharma who plays Hassan made a big splash (pun intended) in his debut as Pi in Ang Lee’s Life of Pi (2012).  It’s well known by now that he got the part among 6,000 auditioning, and only because his brother talked him into accompanying him to the try-outs; he went simply on a lark.    Since then Sharma has been seen in a number of movies and television series, including “Homeland” and “God Friended Me.”  He’s a fine actor, who has a chance to show his range in Illegal, from naïvete to moral outrage, to young love, and all of the personableness in between.
A resounding statement in the film suggests its essence:  “Hope deferred makes the heart sick.  It can even kill a man.”  We see the roller coaster ride Hassan takes, admire his fortitude, and realize the film has a hard lesson—not only for those with the hope of immigration to the U.S.—but just as much for those of us already here, living our comfortable lives.

An entertaining and heartfelt story about someone wanting to find the American dream, and the reality of his search.

Playing at the 2019 Austin Film Festival: