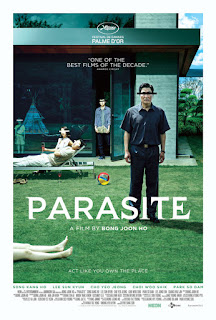 Bong Joon Ho’s stories take you into another world so that you have to re-orient yourself into real life after you come out of a screening.  He has the ability to get you so engrossed in the characters, their environment, and the events—and keeping it all straight—you’re in something like a trance immediately afterwards.  This is especially so when you think you’ve seen the major part about halfway through, then he lowers the boom, taking your breath away once again.  The movie is full of surprises.
The story begins with the Kim family (mother, father, adolescent son and daughter). They live in a slum, barely getting by because jobs are scarce, but they all seem to be resourceful and industrious (how much becomes part of our fun later on.) Son Ki-Woo (Choi Woo Sik) has a friend who is tutoring a child in a wealthy family, and when he has to go abroad for a study period, he convinces Ki-Woo to take his place while he’s gone because he trusts him more than his college buddies.  Ki-Woo takes it on and it’s working out very well, when he learns that the family’s young son is artistic and hyperactive.  He realizes the child Da-song could use an art teacher, so recommends someone he says he knows (actually his sister Ki-jung) to the mother, Yeon-kyo (Yeo-Jeong Jo).
The farce begins when every Kim family member is working for the Parks under assumed names, not revealing their relationships.  Granted, to achieve this, the Kims have to resort to ruses that are considered illegal/unethical.  Here is where the writers (Ho and Jin Won Han) nudge us a bit.  By this time, we have sympathy for this poor family; how much do we tolerate their means of achieving a better living?
The Park family is interesting for very different reasons.  The father (Sun-kyun Lee) is a successful businessman devoted to his family.  His wife, good-hearted Yeon-Kyo (Yeo-Jeong Jo), is an easy mark for deceit, welcoming each new addition to the staff with open arms.  Daughter Da-hye (Ji-so Jung) develops an instant crush on her new tutor, and son Da-song (Hyun-jun Jung) is in his own world, able to be tamed only by his “art teacher”, Ki-jung (So-dam Park).
Bong Joon Ho likes to juxtapose the “haves” and “have-nots”, just as he has done in Snowpiercer, and, to some extent, Okja.  This time, he does it in ways that allow one to be sympathetic to both sides.  He does portray the Parks as preoccupied in their own world with little/no awareness of the suffering around them.  They are both easy marks for “clues” planted by the Kims, especially in a hilarious scene of step-by-step paranoia related to a pair of panties in their chauffer-driven car.  Ho is a bit easier on the poorer family, coming close to excusing their sociopathic strategies to achieve basic needs for food and housing and the education necessary to acquire them.
Bong Joon Ho has solid backing from his composer Jaeil Jung and cinematographer, Kyung-pyo Hong.  The music and visual contrasts between the lives of the Parks and Kims and where they live are accentuated to show the desperation of the Kim family and the Parks’ sense of entitlement and lack of awareness of what is happening beyond their secure gates.  The pictures are eloquent in saying what Bong Joon Ho intends for us to infer about the ethics and values involved on both sides.

This film will make you squirm, tense up, and chuckle, even horrify you—all reasons enough to see it.

Posted by donnarcopeland at 10:37 AM