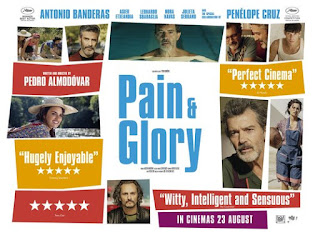 Pedro Almodovar’s account of his early years and a low period in middle age when he was suffering with a host of bodily complaints, depression, and anxiety is a soul-baring, intimate look at his life.  Interestingly, he sets aside the years when he was becoming and had achieved fame as a world-renowned filmmaker, although the main character, Salvador Mallo, is portrayed as just such a person.  But except for giving us brief pictures of Salvador’s childhood, this story focuses on an aging man in the midst of an existential crisis marked by physical ailments and ennui.
I love the way the movie opens with the young Salvador (played by the enchanting Asier Flores) and a group of boys being asked by the choir director at church to demonstrate their potential for singing.  His pitch is perfect, demonstrating promise, at least in singing.  But the child goes on from there in mastering his studies and earning a scholarship at seminary. (Make no mistake, though; he definitely does not want to become a priest!)
The film jumps back and forth between Salvador’s young life [poor, encouraged by his mother (Penelope Cruz, who always livens up the scenes she’s in] and much later on when he is at his lowest point, being supported primarily by his good friend Mercedes (Navas), who manages to get him to medical treatment.   It’s the most depressing part of the film because not only is Salvador suffering from a paralyzing depression, but he’s gotten into heroin to ease his pain.  He has re-connected with an actor (Etxeandia) in one of his films whom he alienated at one point, and with his old lover Federico (Sharaglia) who appears by sheer chance.
All this is suspenseful as to how it will turn out in terms of Salvador working through his significant difficulties.
The talented Antonio Banderas is a long-time friend and collaborator of Almodovar, so his portrayal of the Salvador character is hand-in-glove.  Some of the most refreshing scenes in the film are those in which Salvador as a child is shown to be so very bright, enthusiastic, and caring toward everyone he meets, he wins our hearts and stokes our belief that everything is going to be all right in the end.
These and other scenes of Salvador with his dying mother and his reunification with Federico are some of the most intimate and revealing moments in the film, showing Almodovar’s admirable understanding of human relationships and how and why they are so important.

A heartfelt, soul-baring account of significant periods in the life of a world-renowned filmmaker.