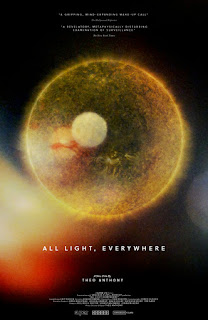 This documentary by Theo Anthony is interesting for our time in its demonstration and discussion of body cameras used by police departments and the larger issue of constant urban surveillance.  The first part is a detailed explanation of how body cameras work, hosted by the Axon company, which produces most of the body cameras and tasers in the U.S. and all over the world.  Their primary aim is to reduce the need for guns and bullets (although whether or not this is the case is belied by all the recent incidents of people being killed while using body cameras).  In the beginning of the film, the president of Axon International gives a tour of the factory making the cameras, and shows a policeman training officers in the City of Baltimore on how to operate them.  There is also a brief history of cameras in general and their many uses across time, the most entertaining being Galton’s use of fingerprinting and photography with film development in his theory of phrenology.

The documentary ends with a heated discussion among Black urban Baltimore residents about the pros and cons of surveillance, which includes one woman’s observation that cameras are ubiquitous—in stores, hospitals, and schools, for instance—but she says that is not where major crimes occur; it occurs on the streets.  So her viewpoint seems to be pro urban surveillance.  But one of the men present keeps questioning its legality and morality.  He thinks that filming for crime prevention is the government’s job; not that of a private company.  He points out that before filming, consent needs to be obtained by those being filmed; this is obviously not done or is even feasible in continuous urban surveillance.

This discussion is very worthwhile to listen to, but I think the filmmakers should have included scholars and ethics people providing information on all the many issues involved in privacy in general—a hot topic these days.

Sometimes, the film is very slow moving, for instance when it extends shots that don’t necessarily convey any information—or at least it’s not clear why the material is being shown.  I think they may have been trying to make it more entertaining—even more “artsy”, but my attention wandered during these scenes.

Overall, the documentary provides interesting and useful information about the use of body cameras in crime prevention and control and some of the rationale for them.  The City of Baltimore initiated a pilot program in 2019, and as of September, 2020, all officers there are required to wear them.  I believe a research program assessing their effectiveness is ongoing, and I, for one, will be very interested in its findings.

Attempts to help us understand how body cameras and tasers work and are useful in policing, along with some of the rationale for their use.

Posted by donnarcopeland at 12:48 PM