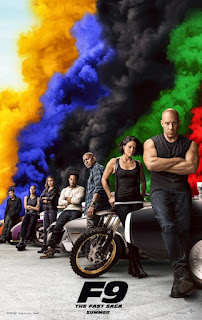 If car racing, heists, and spying—with all the special effects that one can think of—is your thing, and you don’t mind absurdity, then F9 is the movie for you.  This is the 10th full-length version of the theme since it first appeared in 2001.  Another theme puts great emphasis on family, a motif repeated across the series, with the star Vin Diesel as Dominic always implying that family is sacred and of the utmost importance.  (“Family” includes all the people one is close to as well as those biologically related.)  The problem in this newest iteration is that Dominic’s estranged brother Jakob (Cena) has suddenly appeared on the scene.

Jakob is clearly less principled than Dom, and is easily drawn in by nefarious schemes, this time with Otto (Rasmussen), with whom he plans on getting his hands on an object that will allow him and Otto to rule the world.  They have captured Dom’s nemesis Cipher (Theron) and put her in a glass box so she can assist them, but she shows only disdain for Jakob.

The movie will take us on a world tour (London, Tokyo, Central America, Edinburgh, Azerbaijan, Tbilisi in Georgia, even outer space) as a way I presume of making the story more exciting.

The biggest problem with the movie as I see it is that practically all of it takes place on streets in big cities with cars and people getting hit and scattered every which way, punctuated with fist fight free-for-alls.  A little dialogue will transpire, but soon it’s back to car chases and fist fights.  It is a tiny bit to their credit in my book that the women are just as ferocious and active as the men; not one hesitates to blast with a gun, her body, or fist…AND with a computer.

All of the movies in the franchise have been big box office draws, although critics tend to be much less enthusiastic.  That has to do with the numerous implausibilities (e.g., cars being shot out over large bodies of water and an actual trip into space) and contradictions (characters seemingly rising from the dead) replete in the series.  But promoters of the film advise viewers just to sit back, suspend realistic considerations, and just enjoy the movie with your popcorn.

F9 remains true to the franchise in its daring thrills and main characters, with the cast cast headed by Vin Diesel as usual.

Posted by donnarcopeland at 10:11 AM