RITA MORENO: JUST A GIRL WHO DECIDES TO GO FOR IT 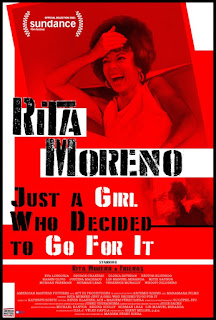 What a life Rita Moreno has had—and it’s still going on!  She got a Hollywood Star at age 64, and at 84 is working on a remake of “One Day at a Time”, a Broadway play.  Arriving with her mother in the 1930’s from Puerto Rico on the U.S. shores, Rosita (only later would she be called Rita) was struck by the lack of greenery and color on her approach and a statue of a woman holding what looked to her like an ice cream cone in her right hand.  Little did Moreno know what was ahead for her.

She was a success right away (“I learned very early how to get attention”), having been spotted by an MGM agent at a New York nightclub when she was only 16 years old. After a brief meeting with Louis B. Mayer, she traveled to Hollywood with a contract in hand, where her mother’s sense of how to make her look as much as possible like Elizabeth Taylor, helped her get cast immediately.  Unfortunately, Hollywood filmmakers saw her solely as a Latina, so there followed countless roles as a beautiful young native girl with an accent.  (She began to realize that it didn’t matter which accent; the filmmakers didn’t distinguish between them.  She only needed to come across as a slightly kooky “other” girl.)

Moreno hadn’t come across many people to guide her in in the new world she was in, so she stumbled into numerous situations/roles that were great initially, but weren’t the best for her ultimately.  But she was good at realizing what she was being asked to do.  This extended to her relationship with Marlon Brando who, despite all his narcissism, at least guided her into psychotherapy.  That would stand her in good stead as she continued to make her way through the Hollywood scene after she and he had parted.

It was interesting to me that the filmmakers (Mariem Perez Riers, director) interspersed excerpts of the Brett Kavanaugh hearings into Moreno’s story.  It was a way to demonstrate the vulnerability of many women in the context of male authority/power, which indicated the intent of the makers of this documentary to use Rita Moreno’s life to illustrate the point.  And that is that generations of women are starting to learn how to manage and maneuver themselves through the male-dominated maelstrom of whatever business they are in.  It’s not just Hollywood; it’s almost every major business of today.