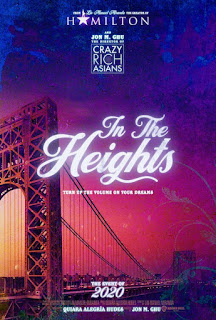 Washington Heights in New York City used to be an Italian neighborhood, but now it is filled with Latinos from Puerto Rico, Santo Domingo, Cuba—you name it—all Spanish-speaking.  Creator, producer, and composer Lin Manuel Miranda is from Puerto Rico, and gives a moving—sometimes playful and funny—account of the immigrant experience.  Everyone seems to be on the move constantly, whether to go back home (listening to “island memories”) or stay, or even move across town, or at least to move up in life.  At times, characters pause and reflect on the present and the need to appreciate the things they have right now.  But hopes and dreams (sueñitos) make up the underlying theme for all, along with finding a sense of belonging, finding one’s place.

Most of the film is loud and frenetic with hip hop, rap, and salsa music and dance going full blast.  All of it is enjoyable (if a little loud and hyper-frenetic), especially the dancing, choreographed by Christopher Scott.  Characters dance and sing everywhere—in the ballroom, on the street, in a tiny apartment.  Woven throughout are vignettes showing conflicts in love, business, and immigrant status.  (Lack of resident documentation for education even gets a shout-out.)

At center stage is Usnavi (Ramos—a favorite of Miranda), a bodega owner with dreams of going back to Santo Domingo and rebuilding his family’s property destroyed in a storm.  He is shy and must rely on his much bolder assistant Sonny (Diaz) to score him a date with favorite customer Vanessa (Barrera), an aspiring fashion designer supporting herself by working at a beauty shop—she hopes temporarily.  They have an off-and-on romance with difficulties trusting themselves and each other.

A role sure to be a hit with audiences is Abuela Claudia (Merediz) everyone’s grandmother.  She’s very different from the popular grandma in last year’s Minari, played by award-winning Youn Yuh-jung, being much more like most grandmothers in the U.S., indulgent and religious (i.e., Christian).

Other entertaining connections involve Nina (Grace), just back from her first year at Stanford University, whose enduring love is Benny (Hawkins).  The issue here is with Nina’s father Kevin (Smits) who is insisting Nina return to Stanford, despite a difficult year facing discrimination and the absence of the community support she is used to having in her hometown of the Heights and her worry about the tuition payments her father is having trouble making.

The production is superb, and director Jon M. Chu (Crazy Rich Asians)—like Miranda, sensitive to cultural distinctions—ably pulls together all the elements in showing us an entertaining, insightful look at a cohesive group of immigrants living in the U.S.  Alice Brooks’ cinematography captures so well the whirling dancers—even sometimes boogying up a building wall—as well as the intimate moments in small settings.  The colorful and eye-catching costumes by Mitchell Travers add another essential art to the production that helps set it off.  It’s a bit long—two hours plus—and some scenes could have been condensed, but interest is sustained throughout.

In the Heights was a hit as an off-Broadway, then Broadway show, and this film is likely to be just as well received, especially by the younger set and immigrants from all over.  Those viewers will be able to identify with the challenges and everyday experiences of these realistically portrayed characters, along with being optimally entertained

A boisterous good time sprinkled with a little heartbreak and true love is in store for viewers of this fine production.