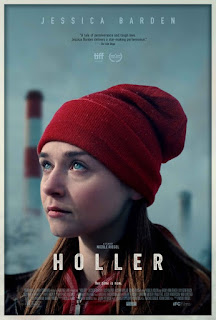 A tale of a midwestern city in the U.S. today.  Blaze (Halper) and Ruth (Barden) are on their own after their mother becomes addicted to opioids and sent to jail.  Blaze is older and takes his responsibility for Ruth very seriously.  He recognizes that she is very bright, and pressures her to fill out a college application.  But things are bleak.  Even after we hear President Trump predicting “jobs, jobs, jobs” on the radio, there are rumblings that the local food manufacturing plant, where Blaze and their good friend Linda (Baker) are employed, is going to close.

Blaze and Ruth carry on, trying to collect enough metal to sell to the local scrap shop to survive, but their rent is past-due and their water has been cut off because they haven’t paid the bill.  The man to whom they have been selling cans and whatever metal they can find, Hark (Amelio) offers them a deal.  He is a self-made man (and proud of it) supposedly making thousands of dollars selling metal to China.  He offers to bring the two into his business with even a place to live—at his house with multiple boarders—and the extra perks of games to play in their spare time.

One big happy family.  Right.  It’s not long before Blaze and Ruth learn that they are expected to participate in extracurricular activities.  It’s a crossroads for them, as they must make a decision about surviving here, compromising their principles, vs. fleeing to unknown places to make a living.

The story written and directed by Nicole Riegel is chillingly realistic, partly because it is partially autobiographical.  Her account illustrates the binds people get into when the world around them doesn’t offer the expected, e.g., a lasting job at a respected manufacturing plant and honorable health care.  How many times has this happened, as U.S. corporations have taken their operations elsewhere, and the medical industry willingly over-prescribes opioids?  Too many to count.

Riegel points out all too well how her characters are hardworking, honest, and adaptable; yet, they are caught in a global crunch far beyond their control.  What do they do then?

This is a fine movie for those who maybe haven’t quite understood the global changes that have been taking place or for those who will benefit from affirmation of their own experience in which expectations of permanence were unmet.  It’s not a profound story as told, but one in which basic truths are well illustrated.

A “Modern Times” story in which young people are presented with choices they may not realize are “do or die.”