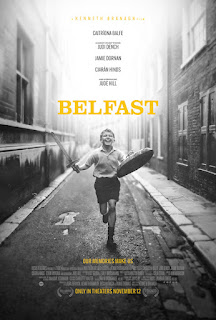 This new film admirably directed by Kenneth Branagh is notable for its black and white screen (cinematographer Haris Zambarloukos, who also filmed Locke) and poignant events going on in Belfast in 1969, the beginning of Northern Ireland’s 30-year “Troubles.”  Highlighting a typical family living in the region, the film depicts torn loyalties and dilemmas about what citizens could/should do.

Most of the drama centers around young Buddy (Hill) whom everyone knows and cries out to as he walks down the street.  We see much of the drama through his most expressive eyes.  His father works out of town and is gone for periodic stretches, so it is up to the wife/mother (Balfe) to hold the family together, albeit with the loving (sometimes humorous) support of grandparents played by Ciaran Hinds and Judi Dench.  Who wouldn’t love those grandparents(!), particularly given that they have a warranted skeptical view of the world they live in.

The big dilemma posed for the family is whether to remain in Belfast where both parents’ families have lived since the parents were toddlers, where everyone in their neighborhood knows them and looks out for the kids, or whether to move to London where their standard of living would be much improved.  This was apparently a common issue for so many in Northern Ireland during that time.  The film captures well the violence in the area and threats to residents to join one side or the other.

Branagh’s direction is expert and sure with the overall tone of the picture, the cast, and the decision to go with a black and white view, both visually and metaphorically.  Jude Hill as the young son appears to be destined for great things in his ability to express naturally so much of what Buddy was experiencing.  I liked in this movie that children are depicted in a way most of us would recognize—thoughtful but still child-like.  The actors playing the adults—Caitriona Balfe, Jamie Dornan, Ciaran Hinds, and Judi Dench—are quintessential performers who will always capture our interest.  They’re entertaining to watch in whatever roles they play.

It was also great to see a movie that is less than two hours long.  Certain events could have been extended to draw out the emotional impact (as so many filmmakers do nowadays), but I appreciated the meaningful brevity in this instance.

The “Troubles” in Ireland are portrayed in a skilled rendition of what happened to individuals and families caught up in the conflict.