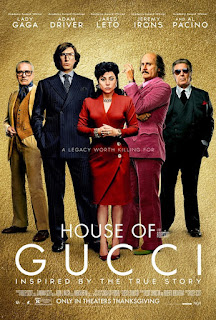 This is a colorful film with a complex plot that begins light-heartedly romantic and interesting.  Mauricio Gucci (Driver) is a reserved young man without much of a social life and still living in his family home with his father Rodolfo Gucci (Irons).  Patrizia (Lady Gaga) is an ambitious, sexy woman who, when he tells her his name at a party, flirtaciously picks him up, in a way, and he is instantly attracted to her.  They seem to mesh well together; she draws him out and he offers her stability and dependability.

After a short time, when Mauricio introduces Patrizia to his father, although the older man is charmed by her, he is suspicious as well and warns his son not to get involved.  This creates such harsh disagreement, Mauricio moves out of the home and shows up at Patrizia’s, where he is taken in and begins working at her father’s trucking company (which Patrizia affectedly refers to as “land transportation”).

Mauricio is modest, belying his wealthy background, and thoroughly enjoys the physical labor.  Their love continues to grow, resulting in marriage and a child.  Many events transpire after that, with the couple remaining very much in love.

Although skirmishes had always been a part of the family’s existence, major trouble begins to brew around running the business and financial disagreements brought on partly by the introduction of Rodolfo’s brother Aldo (Pacino) in New York City, to Patrizia and her not being able—or willing—to resist getting involved in the business and pressuring her husband to take certain actions.

What transpires is heightened intrigue and shifting loyalties and how far people in families will go when bonds weaken and their circumstances begin to change.

Ridley Scott directed the film based on a book by Sara Gay Forden, with screenplay by Becky Johnston and Roberto Bentivegna.  The pace goes along nicely, giving the viewer time to absorb who all the players are and mete out the twists and turns as in a good crime story.  Scott is better known for his scripts than for his direction.  And it is probably the case in this film that his reputation is borne out.  For those who are not familiar with the story, there are major surprises as all the different elements unfold, a positive of the script.  Direction, however, may be lacking in the cohesiveness of the cast in the story.

That being said, along with the script, the cast is one of the film’s strongest points, beginning with the two leads, Adam Driver and Lady Gaga.  Driver is on a roll this year, with three of his movies on wide-ranging subjects being released.  Here, he is his most laid back, slow to burn character until he is pushed too far.  Lady Gaga is good at playing an ambitious woman who uses her sexiness to her advantage.  Her performance may be a bit “over the top”, but I enjoyed her young enthusiasm and craftiness in the beginning.  Later on, as the plot thickens, she is showing more of her naivete, and she relies more and more on her fortune teller (Hayak—who doesn’t quite fit the role), one’s sympathy for the character (and perhaps for the house of Gucci and The House of Gucci the movie) wanes.

In the mix is the uncanny performance of Jared Leto as Paolo Gucci, the “idiot son, but he’s my son” son of Aldo.  Leto shows the man as one with questionable talent who is a bit of a changeling, trying to adapt himself to whatever he thinks is expected.

Some may think this film is more about the fashion industry, but it is actually a chronicle of an international company whose direction failed in the face of conflicts within its leadership, a family.

Go and see this as a film about a family business rather than about fashion.