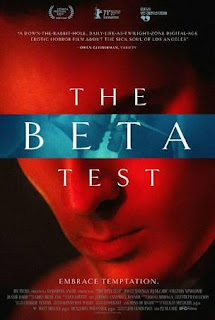 The Beta Test will appeal to those who are sure that the internet is going to be the downfall of individual lives, and I’m not sure who else.  The movie focuses on two men trying to make their Hollywood talent agency a BIG success, but it’s rather muddled in its explanation as to why that might not happen.  There are so many ways…

Jordan (Cummings), one of the partners in the agency, is engaged to be married and is working hard with PJ (McCabe) to make their company hugely successful—that is world-class—perhaps at any cost.  However, Jordan becomes distracted by an invitation to a one-time no-strings sexual encounter that he can’t resist—not a good plan for someone who is naturally suspicious and is so self-focused he doesn’t really seethose he engages with, not even his fiancé, who will eventually complain about such.

Jordan takes the invitation bait, and the rest of the story tells what effect it has on him.  He becomes testy, but this is only part of it.  In his anxiety, he mixes up real information with his fantasies about who is who and what is what.  After he confesses what he has done to his partner, PJ fills him in on how personal information is collected on the internet and how it can be used—all news to him.  It also presents a dilemma for their company, in that their tactic is DATVO (Deflect, Attack, Replace Victim with Offender).  In other words, they are willing to use underhanded techniques to win customers.

The film endeavors to keep the viewer in suspense, but Jordan’s behavior is so juvenile and risky (e.g., posing as a policeman and a federal agent), the viewer is hard pressed to maintain an interest in the story.

Other problems include the quality of acting.  Cummings and McCabe are not only writers and producers, but primary actors in the film.  This is unfortunate because the dialog and the way the two actors deliver it sounds artificial—not realistic in the least.  Not only that, but the basic premise is that an untrained individual can become a good detective.  In trying to ferret out who has betrayed him, Jordan’s emotional investment in his decisions are obviously risky to him both legally and physically.

Cummings is also the editor of the film, something else that detracts from the quality of the production.  There are so many cuts—often between scenes that have no connection—the movie becomes so disjointed it’s hard to make sense of it.

The only possible meaning I derived from Beta Test has to do with the damaging effects of guilt, how it distorts reality and how damaging it is in relationships.  Otherwise, the meaning of the film is a mystery to me.

This is a film that needed help in writing, directing, casting, and editing, so its existence is puzzling.