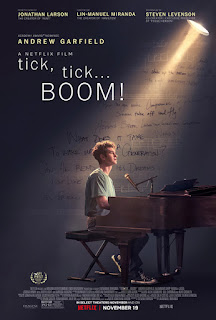 Jonathan Larson, the creator of the hit musical “Rent” (which earned Pulitzer and Tony awards) is the subject of this film as he was writing one of its predecessors.  He is young—not yet 30—but wants to set the Broadway world on fire with his musicals.  He captures the interest of one who turned out to be his long-time mentor Stephen Sondheim (here played on note by Bradley Whitford), and one of the humorous segments of the film is Sondheim and a colleague critiquing one of Larson’s first musicals.  It’s funny because the colleague seems to want to trash it, but after Sondheim gives his opinion, the man agrees with him in a roundabout way.  (A wonderful rendition of doublespeak.)

Tick, Tick…Boom! canvasses a wide range of subjects—writer’s block, homophobia and the AIDS epidemic, the tension between art and corporate concerns, and on a more personal level the tension and pulls between professional life and human connections—all of which were highlights in Larson’s life. These subjects are the “meat” of the production.

I found the story more engaging than the music, especially in the beginning, which is frenetic and hyper in the partying mode.  At the middle point of the drama and towards the end, music and story become more inspirational.  The duet of Susan (Shipp), Larson’s neglected girlfriend and Karessa (Hudgens), one of Larson’s main characters/singers, sing about Jon’s struggle in writing the most important song in the work; it’s a stand-out, especially touching and beautiful.  I also found the songs of Larson and de Jesus at the end singing about AIDs just as beautiful and moving.

Andrew Garfield may not be the most appealing star of a musical, but his performance here proves his talent.  Shipps’ and Hudgens’ voices complement each other and express well the emotions their characters are experiencing.  The entire ensemble of musicians makes this musical vibrate.

Another strength of Tick, Tick…Boom! Is the cinematography of Alice Brooks.  She inserts a number of shots that are humorous and inspiring, such as that of Jon at his lowest encountering the “30” at the bottom of the pool (reminding him of his impending age) and swiping it into a treble clef, just what he needed for inspiration to write the most important song in his current production.  There are numerous creatively rendered shots that enhance this production

Tick, Tick in the title refers to the ticking of time, that it is always there to remind us of the finiteness of life and relationships.  I think the film did a great job of reminding us of that and encouraging us to ponder it a bit.  And to emphasize the point, Jon’s agent tells him after the success of the Tick, Tick...Boom! workshop that his next job is to start writing his next show immediately.  No rest for the weary!

Tragically, that tick tick of the clock was a knell for Jonathan Larson.  He had an aortic aneurysm that killed him suddenly at age 35.  Our loss for sure.

Posted by donnarcopeland at 12:18 AM