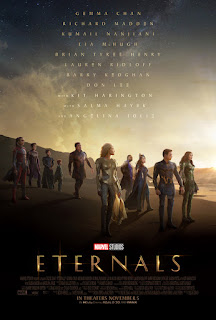 In the Marvel universe jumping through time and space are de rigeur, as seen in this film, which starts from 5,000 B.C. in Mesopotamia and goes through the centuries to the present, touching on Babylon, Chicago, South Dakota, Tenochtitlan, Mumbai, Australia, the Amazon, Iraq, and spaces in between and up in space.  It will make you dizzy trying to keep track.  Not only that, one must also keep track of tricky names:  Thena (not Athena), Sirsi (not Circe), Ikaris (not Icarus), Phastos (not Hephaetus), all tied to Greek mythology.  They are clever and make you smile.

Anyway, the story is roughly that a being called Arishem has created not only humans but also Eternals who are intended to survive anything, and… what? Deviants are sent to destroy the Eternals?!  Well, like any god-like figure, Arishem is quixotic—at least seemingly.  Through his own reasoning, he decides to foster the emergence of a Celestial transformation that could dispose of humans in the interest of furthering civilization development.  This sets up a fierce battle among the Eternals—one siding with Arishem and the others wanting to preserve humans and the earth planet.  This constitutes the rest of the story in Eternals.

In wresting with these conflicts, there are some philosophical discussions/arguments about life paradoxes to tease the mind, such as that creation always involves destruction; some have to die in order for other life to be born.  Also to be wrestled with is that even though Heresham created humans, Eternals, Deviants (which he lost control of), in the offing he plans for the emergence of the Celestials.  Life is a cycle of creation and destruction.  But some are questioning Creator Arishem’s requirement that Eternals not interfere in human conflicts because he says that conflicts and war are necessary for the development of the human world.

The script adapted from Jack Kirby’s original comic books by Chloe Zhao, Patrick Burleigh, Ryan Firpo and Kaz Firpo is reasonably good, but goes on far too long for this type of movie.  It does meander into some of the Eternals’ lives, such as Sersi’s relationship with Ikarus and a human named Dave, Phastos’ complex relationship with Thena and his subsequent attachment to a human who will give him a family, and Druig’s going off on his own to establish a community with the Amazonians—which is always interesting, but none of these pairings are highlighted enough for us to cheer them on.

The crafts in Eternals—cinematography (Ben Davis), music (Ramin Djawadi), special and visual effects, art, and sound—are extraordinary, easily transporting the viewer into the mythological realm.  As Marvel movies go, this one seems to be one of the better ones, having some grounding in literature and wrestling with contemporary issues.  I think the upshot of it all is that any group needs to stick together as one, united against forces against it.  But—there is likely to be a sequel, so we’ll see where it goes from there.

Eternals are eternal, except…The twists and turns will keep you engaged, but leave you wanting more.  It’s more the crafts that will amaze you.