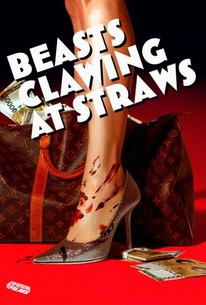 Macabre thriller with some humor is how I would describe Beasts Clawing at Straws.  It consists of a series of vignettes about a disparate group of people whom you gradually—only very gradually—realize are connected with one another.  To make it more complicated, characters evolve across time, so that who you think they are in the beginning is different from how you end up seeing them.

The skeleton plot is about a Louis Vuitton bag that is placed in a locker at the airport.  The fact that it is not claimed by the end of the day—or days—is the basis of the story of not only the bag, but of the various people who handle it across time.

Those we meet along the way include a cleaner at a gym, a customs official, a prostitute, her boss, an abused wife, a mother with dementia, police detectives, a john who is an illegal alien, and still others.  Taking a riff on Shakespeare, I’ll say, “Oh, what a tangled web we weave when first we practice to deceive.”

I don’t know the novelist Kaisuke Sone who came up with the original story, but I presume that the director and writer of the screenplay, Yong-hoon Kim, appreciated the cleverness of the story in its connecting such disparate characters with one another, and story’s appeal to film audiences.  It works your left brain in following the plot and your right brain in bonding with the characters.  So many are losers in one way or another (You may find yourself yelling out at them from time to time.), yet they capture your interest and empathy when you hear their story.

Bottom line, this is about desperate people trying to make their way in a world that teases them then pulls the carpet out from under them.  Regardless, you’ll find yourself rooting for each and every one of them.