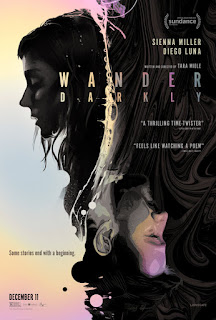 Wander Darkly is an apt title in that viewing it is like wandering darkly throughout the course of the film. I have some inkling of what writer/director Tara Miele is trying to do, but it just doesn’t work—at least not for me.  The constant flashes back and forth between reality and memory became tiresome for me in a short time.

A young unmarried couple tries to make their alliance work; and it does seem like a sincere effort in their buying a house and having a baby—on purpose, not by accident.  Adrienne (Miller) comes across as insecure, needing constant reassurance from her husband Matteo (Luna).  He doesn’t care much for her mother Patty (Grant), partly because she just doesn’t trust him, but these appear to be problems most couples work through one way or another. Then Adrienne and Matteo are in a car accident.  The whole rest of the movie is watching how they deal with the aftermath.

Two talented actors, Luna and Miller, ably carry the movie and are convincing in their portrayals.  Supporting actors—who primarily have cameo roles—are likewise good in being plausible and moving the story along.  The best scenes are when Adrienne and Matteo are having heart-to-hearts, with each showing insight into their own behavior.

Cinematography by Carolina Costa (Suspiria) is especially good in artistically depicting varying scenes of landscapes, seascapes, and hospitals that reflect the changing moods of the story.

What detracts from the movie are the constantly recurring scenes of the couple going over and over what happened repetitiously.  The last scenes clarifying what actually happened seem gratuitous and sort of “tacked on” as a way of ending a story that hasn’t held much promise.

Wander darkly through this film, only if you have much more imagination than what is presented.

Posted by donnarcopeland at 12:01 PM