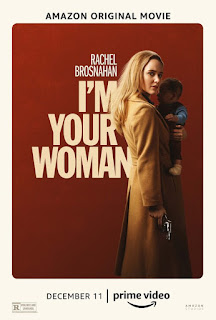 There are significant twists in this crime drama, but a fair amount of time is spent in figuring out who characters are.  Like many horror films, the filmmakers keep you wondering and guessing, and in this case, that’s most of the movie.  The reasons given are always that it’s too dangerous to be given details.  No spoiler—this is about a crime family.

Jean (Brosnahan) is relaxing by the pool at an upscale house when she discovers that a new robe she is wearing still has the tags on it.  Not being able to pull them apart, she runs through the house trying to find scissors.  Amusingly, this is just the start of the many puzzlements that will follow (i.e., doesn’t everyone know where they keep their scissors?).  Suddenly, in through the door walks a man holding a baby.  Is it her husband?  Where did the baby come from?  I do say that this is a clever way to start a drama filled with conundrums.  It will be a fairly long time before the viewer gets these questions answered.

We have come to know Rachel Brosnahan primarily in her frequently awarded performances in the Amazon Prime television series, “The Marvelous Mrs. Maisel” (also with many awards).  The arc of her character is similar in I’m Your Woman, going from a protected housewife to someone who is dynamic and forceful; but the circumstances are totally different.  In the former, she evolved from a protected housewife in a Jewish family to a successful comedienne.  In I’m Your Woman, she is catapulted from being the shielded wife of a criminal to using her wits to, literally, fight for her life.

In addition to the rather shocking twists in the story, Brosnahan’s transformations keep the story going, and attest to her skill in keeping the viewer invested in her character.  Clearly, she goes from a woman who feels overwhelmed with motherhood and one whose husband won’t even let her drive to an analytic, quick-thinking woman determined to survive.  Her co-stars, Blake and Kene, measure up in portraying a calculating pair whom Jean has to trust.  Always believable, the two actors convey so very well the kind of mystery that surrounds them.

Kudos to the co-writer (with husband Jordan Horowitz) and director Julia Hart for incorporating a Black family into the script who have significant roles in being smart, caring, and capable.  The movie does a great job in integrating the races in a way that is realistic and a model for other filmmakers.

One way in which I’m Your Woman lapses a bit is in the main character being able to lie glibly at one point, but in a much less threatening situation seeming not to be able to come up with answers and set limits.  In movies like this, my mind often goes to practicalities that diminish the suspense, such as, “Where/when do they get those extra clothes?”  But for the most part, the plot is well conceived, and the actors bring us along beautifully.

This film has much to offer in terms of script, acting, and directing. Minor glitches do not diminish its impact.