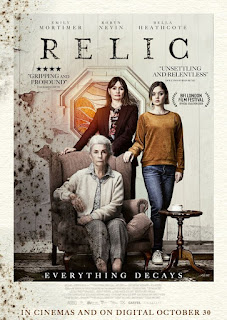 A horror story, to be sure.  The first part goes rather slowly in setting things up—mother, daughter, and grandmother not being very open in their communication.  True, the grandmother is clearly demented and refuses to account for a recent absence; she just stares into space or changes the subject.  All of this is a bit frustrating for the viewer in its pace.

The story begins with Kay, the mother (Mortimer) and her daughter Sam (Heathcote) being called back to the homestead because Edna, the grandmother (Nevin), has not been seen for quite a while.  Kay reports to the police that her mother is missing, and a search party begins scouring the nearby woods trying to find her.

All along, while Kay and Sam are staying in the very large house, they hear bumps and other noises during the night, which are unexplained.  When Edna does finally appear, it is clear, as Kay says, “she forgets things.”  Other bizarre behavior doesn’t show up until later.

After considerations of whether Sam might come to stay with Edna, or Edna being put in a retirement home near Kay, the situation begins to worsen.  It’s best not to go into detail, because the strength of the movie co-written with Christian White and directed by Natalie Erika James is in the suspense and the suddenness of certain events. James, a young director primarily of shorts, is already getting buzz from her first feature film at the Sundance Film Festival and others.

The three actresses whom we see for almost the entire film deliver fine performances, especially Emily Mortimer with a number of fine films (Lars and the Real Girl, Lovely & Amazing).  She can always be relied upon for top-notch work.

Brian Reitzell contributes wonderfully eerie music, along with the production and sound design, which add greatly to the sustained suspense.

Relic is likely to be greatly appealing to horror fans.  For those of us not so enamored, some observations stand out, having to do with believability. One is that even though the house is very large, it doesn’t make sense that someone who is pounding and pounding on walls upstairs is not heard by those in the lower part of the house. Secondly, it is clear that Edna is so demented she should not be left alone for any time at all.  Yet, her daughter and granddaughter are not watching her constantly.  This may be too critical, is that in reality many family members frequently dismiss overt symptomatology in their relatives.  Yet, it seems that as disturbed as Edna is found to be, no one thinks about immediately putting her somewhere where she and others will be safe.

For hard-core horror movie fans, Relic might be a real treat.  For others, it may be too fanciful.

Posted by donnarcopeland at 8:45 AM