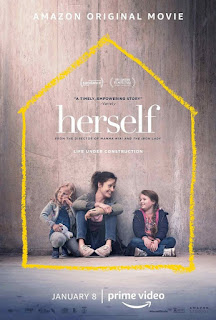 Herself.  An intriguing title for a film.  After I watched it, I thought about an improvement on the title might have been Her Self, for Sandra (in a winning performance by Dunne) finds her self in the events that will transpire. The film absolutely captures the figure of a woman literally beaten down, unsure of herself but with, somehow, a deep abiding truth about what is good and what is acceptable.  It chills to think about the countless numbers of women just like her.

Sandra is a fairly typical mother who loves her children and is especially good at encouraging their play and fantasy life.  Emma (O’Hara) and Molly (McCann) like to romp and play, and are fun children to be around.  The two girls are well behaved and adults are always charmed by them. But Molly has seen something meaningful in her life, and when her parents separate, she begins to refuse to go with her father on the court-appointed day.

This spurs the father (Anderson) on to sue for custody of the children.  We see a trial that pulls in evidence that he can use, but this is not the full story.

The film is directed by Phyllida Lloyd (Iron Lady, Mamma Mia) who has a practiced eye in observing all kinds of dilemmas women face in life.  Her sensitivity is apparent throughout Herself in highlighting the kinds of support women need in facing the trials of life—mentors, generous volunteers, advisors, and family members, to name a few.  And she is likewise expert in characterizing specific personalities.

Clare Dunne (who also co-wrote the screenplay) convincingly portrays a resourceful woman caught in a multitude of dilemmas, pulled first one way and then another, trying to make sense of what is new to her, and always mindful of her children. I was especially drawn to Harriet Walter’s performance as an older woman who grasps the import of a situation and makes up her own mind about what to do.  She is a mother figure, without which Sandra could perhaps not achieve what she does, primarily faith in herself.

This film is about how the efforts of a community can be the determining factor in the fate of one of its members.

A straight-to-the-heart drama about how a community can come together to serve the needs of a self-sufficient but desperate woman.

Posted by donnarcopeland at 10:24 AM