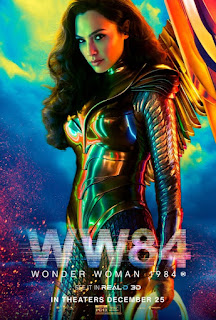 What a different film from the 2017 version, which I had loved.  It’s puzzling that this one, written by essentially the same writers (director Patty Jenkins, Geoff Johns, Dave Callahan) and with the same director (Patty Jenkins), could fall so short of the previous version. Could the fact that it had so many (17) producers have made a difference?  Probably not, and with fine actors like Gal Gadot and Chris Pine returning, and given a strong supporting cast, with Kristen Wiig and Pedro Pascal in co-starring roles, the fault seems to lie in the script.

Case in point, the beginning scenes setting up Diana Prince’s (Gadot) relationship with Barbara (Wiig) are especially cringe-worthy.  Barbara’s idiot-level hero worship of Diana while debasing herself sounds phony, which is born out by an abrupt change later on that doesn’t make sense.  I have a real problem with roles like this written for women.  I have yet to meet someone in real life like that. Moreover, there is no rationale provided as to why Barbara would make such a sudden change toward Diana. Diana was always respectful and encouraging to Barbara, and hasn’t seen her for some time, much less done anything to warrant the bile.

This is an action movie, and like most, is committed to battle after battle with unmitigated impossibilities in the action.  It has to rely on magic, which might be thrilling for some, but unless it is well thought out, it comes across as ridiculous.  I take into account that such a movie as this needs to have something of a comic-strip stamp on it, but it also needs to have some realistic underpinnings.

One thing the film does well is in its caricature of someone like Maxwell Lord (Pascal), for whom no amount of acquisition is enough.  The excesses of that personality are drawn out and constitute the main point of the film.  On the other hand, I found his relationship with his son rather treacly, and think it was better to have left that out, particularly since no mention of the child’s mother is made—except to disparage her when she drops her son off for time with his father--and no substance is given to the father-son relationship other than the father’s narcissistic attachment and his son’s yearning for him as a real person.

Gal Gadot’s presence is the only exciting aspect of this film that makes you want to continue viewing her tale.  No one else in the film has that kind of draw, which consists of more than her grit and skill; she has strong moral values she is living by. Unfortunately, this film neglects to highlight and honor her nobility.

The craft in filmmaking is good, but unfortunately, the script is lacking in its appeal, and Wonder Woman’s greatest assets are underplayed.

Posted by donnarcopeland at 8:21 PM