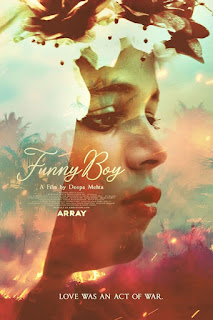 The film captures an unusual coming-of-age story based in Sri Lanka, where the Tamils and the Sinhalese are at war with one another, a schism that reflects the one in families who firmly believe in dichotomous categorization of sexuality, making any other manifestation illegal.  Arjie (played by Nand and Ingram as younger and older) seems to be a happy, agreeable child with a flair and talent that only his rebellious aunt recognizes.  Before long, he is taunted by kids around him calling him “funny boy”, his father shows concern and attempts to steer him in more traditionally masculine pursuits, and his mother tries not to worry.

This part of the story is troubling to watch, as Ajie’s cricket-playing brother struggles with the issue when the father insists he bring Arjie into his sports world.  It doesn’t work, of course, and the father has to step back; he is a gentle man at heart.  In the meantime, the solicitous aunt is married off in a “good” match instead of her beau, and moves away (with Arjie pining for that support).

As Arjie matures, the issue of his sexual orientation becomes harder and harder to ignore when hormones begin their insistence.  At school, he meets another student, Shehan (Mudannayake) who “recognizes” him, and a mutual attraction develops.

Parallel developments can be seen in the trajectory of their relationship and the larger one in the country between the Tamils and the Sinhalese, which becomes more and more threatening.  Of course, as fate would have it, Arjie is Tamil and Shehan is Sinhalese—which is, of course, no problem for either of them.

Here, the movie turns to the extreme, violent unrest within the country (this takes place right before the civil war in Sri Lanka), and we witness the outcomes for all the characters.

Writer/director Deepa Mehta transforms Shyam Selvadurai’s novel into a film that has heart, suspense, and excitement, weaving together the political and personal elements that reverberate with one another.  Howard Shore’s score—expressing both Asian and American musical sentiments—enhances the drama, along with Douglas Koch’s captivating cinematography, both of which contribute to the excellence of this fine production.

The actors make this film come alive in endearing us to the characters, especially Nand and Ingram in their portrayal of Arjie’s developing awareness of the world around him.  Agam Darshi as the charismatic aunt pulls us in immediately, both as a charm and as a preview of what could happen to her and to Arjie.

A cross-cultural look at a time and place that could have relevance for Americans today, if we choose to look.

Posted by donnarcopeland at 11:52 AM