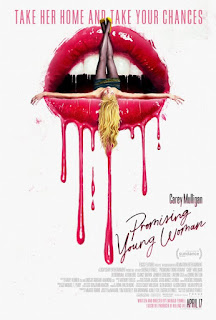 She’s promising all right.  Cassie (Mulligan) is a young woman working in a coffee shop who adores her boss, but her heart isn’t exactly in her job.  Her parents express concern because she doesn’t seem to have any friends, and it’s especially troubling that she doesn’t have a boyfriend.  They want her to move out and forge her way ahead in life.  As the story proceeds, we get the impression she is very bright and used to be in medical school.  But that was long ago.  She has a few flings, and the guys always rhapsodize about how beautiful she is.  Some of the time, she appears to be so intoxicated she has trouble walking, but then she can shore up suddenly and appear cold sober.

The director, Emerald Fennell, has been an actress for most of her career (Camilla Parker Bowles in “The Crown” and a nurse in “Call the Midwife”), but she has also been the writer for television shows (“Killing Eve”, “The Drifters”); now, for her first time as writer/director of a film feature, she has crafted an impressive work with expert pacing throughout.  There is some comedy in the beginning, as noted in the ads for it, but the drama and horror are not far behind.

Fennell’s pacing for the kind of film she has made enhances the power of the drama that ensues, and she allows information about the past to emerge only in small increments.  Cassie is a little hard to figure out in the beginning; she surprises us with what she says and how she acts at times.  She’s so closed up—even with her parents—she’s hard to read.  Yet we see her doing unexpected things that won’t make sense until much later.

Mulligan is perfect in the role—as skillful in playing a drunk as she is in verbal sparring and flirtatiousness.  About halfway through the movie it begins to dawn on the viewer what she might be up to, but it remains unclear until the very end.  Cassie is especially changeable with a man from her past who was always attracted to her, and now openly asks to date her.  At times she seems willing, then backs away. Bo Burnham as Ryan is a good match, and they have a great time being silly together and very slowly falling in love.  He is able to make her laugh and she gradually opens up to him.

The number of supporting actors/characters appearing from time to time means the viewer has to pay attention and may find him/herself scrambling for their names and keeping track.  But they are all solid, and their bit parts enhance the movie’s quality. The actors include Laverne Cox, Clancy Brown, Jennifer Coolidge, Alison Brie, Molly Shannon, Connie Britton, Max Greenfield, Gabriel Oliva, and Alfred Molina.

Promising Young Woman clearly fits well into the “#MeToo” era, and could be instructive for young men and women to see.  The story comprises an eloquent depiction of what might be considered innocent fun and games for some who may not be fully aware of the consequences.

This is an extremely well constructed film with the gradual enlightenment of characters building up to a final conclusion.

Posted by donnarcopeland at 11:36 AM