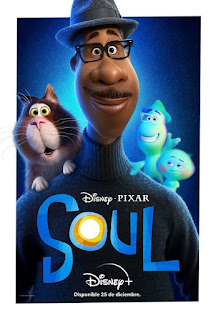 This is a Pixar movie renowned for its colorful history of bringing movies to children (e.g., the Toy Story series, Finding Nemo, Inside Out, Up, Coco, The Incredibles, Monsters Inc.).  In Soul, it is up to its reputation in superb animation and graphics, characterization, and music (Jon Batiste, Trent Reznor, Atticus Ross).  Whether or not children will grasp the intended principles planted in the script is yet to be seen. It has a “smell the roses while you may” quality to it that adults will clearly get, and its treatment of death will be meaningful to them as well.  Perhaps children will be entertained primarily by the imaginative animation, design, and effects…and watching Joe’s ungainly navigation and the spunky cat, 22.

The story is that Joe (Foxx), a middle school band teacher is gifted in his work, but aspiring to be a jazz musician, much against the advice of his mother (Rashad).  When he gets talked into an audition with the Half Note combo led by Dorothea (Bassett), he nails it and forgets about teaching.  In fact, he is so excited he’s not careful where he’s going and steps into a manhole, losing consciousness.

The writers Pete Docter (director as well), Mike Jones, and Kemp Powers have invented a “holding” place for Joe to go while he awaits his final destiny.  He freaks out when he realizes where he’s going and runs backwards trying to escape.  Where he ends up is a place populated by little amorphous beings yet to be born, one of which is the misfit 22, who has never found that spark that will light up her life.  Somehow during this time, a mistake is made in assignments, and Joe gets assigned to be a mentor to 22.  After bickering with one another, they find a loophole in the system and manage to get themselves transported back to earth, where Joe hopes to rejoin the combo and be a jazz musician.  But after they land, he is in a hospital bed with a cat the nurses have given him as therapy.  In another accident of fate, 22 the cat ends up in Joe’s body and he in hers, but despite everything, they manage to escape the hospital and head toward the Half Note.

There are plenty of adventures along the way and the insights they each gain about life will be passed on to the viewers in story-like fashion.  Jamie Foxx and Tina Fey as Joe and 22 make up a funny, entertaining duo, and they are finely backed up by Angela Bassett, Phylicia Rashad, and Daveed Diggs.  The music is remarkable in that Jon Batiste (TV’s “The Late Show”) weaves in his elegant jazz into Trent Reznor and Atticus Ross’s original score, resulting in an innovative combination.

This is one of the few animated pictures that might need subsequent viewings to grasp a complex script and fully appreciate the score.

Another Pixar success in a long stream of captivating animated productions.

Posted by donnarcopeland at 11:45 AM