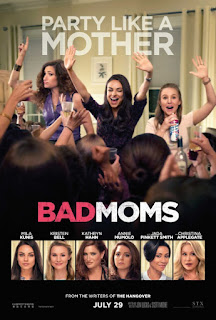 Observe a typical American mother’s day, as Bad Moms illustrates, and you will get dizzy.  That is, if the mom is conscientious, guilt-ridden, and feeling that she has never done enough.  Mila Kunis as Amy is such a woman, driving the kids to school and activities, helping with (doing) their science projects, attending their games, shopping, cooking, active in PTA, and a myriad of other tasks, all while holding down a job.  Her husband (David Walton) seems to have a cushy job and no other responsibilities at home, and has no clue about empathy.  However, when he transgresses beyond her tolerance—about the same time that she meets two women who will be bosom buddies, Carla (Hahn) and Kiki (Bell)—Amy begins to see the light and realize what her life has become.
The instant friendship that develops among the three women is not only beneficial to all, but their antics are often funny (except the over-drinking), and they are the embodiment of true friends.  Kunis as the lead actor holds her own and shows her considerable talent.  Hahn is bawdily hilarious as a street-smart, good-hearted but not-so-good mother, and she elicits most of the chuckles.  Kristen Bell, is perfect as the wide-eyed Kiki who has always been the epitome of good girl, good wife, etc., then draws applause for her assertiveness toward the end of the film.
Of course, in a film like this, there has to be baddies, and the principal role for that is played by Gwendolyn (Applegate), the president of the PTA, who not only wields her power within that organization, but within the entire school.  Her two yes-women are Stacy (Smith) and Vicky (Mumolo).  Shows about women, sadly, seem to require a cat fight at some point, and this is included in Bad Moms in the form of Amy standing up against Gwendolyn’s demands (ridiculous requirements for a bake sale) and competing with her in an election.
There are some very good lines in Bad Moms, like, “Everything that comes out of your mouth is a cry for help” and “You’re not a slow learner; you’re just entitled.  Do you know what that means?”    And I enjoyed those, but much of the plot is like a canned sitcom going for easy laughs without much thought going into making the comedy meaningful and inspirational.
The basic premise of this film is good—that American moms try to do too much, don’t expect enough from their kids, and have continuous self-doubts.  And I can imagine making a very successful comedy to get those points across.  The mistake writers/directors Jon Lucas and Scott Moore make is duplicating their Hangover films; their good points are over-shadowed by bad behavior that is supposed to be funny (and, granted, it is to some people).  I’m often taken aback by what people do laugh out loud about in movies.  Inevitably, pratfalls, farts, and getting hit on the head will draw them out, but they might also laugh about over-drinking, driving recklessly, and even sad events.  This film shows, as do a number of movies recently (e.g., Absolutely Fabulous, Ghostbusters, Mike and Dave Need Wedding Dates, The Neon Demon), women at their worst—sniping at one another, over-drinking, being hysterical—which are meant to be funny, and indeed many do laugh.  I don’t.

The female version of Hangover films—if you like that kind of humor.

Posted by donnarcopeland at 11:25 PM